It is with great pleasure that The American University of Rome (AUR) has announced the appointment of a new Senior Director of Development, Anne Marie Judge. 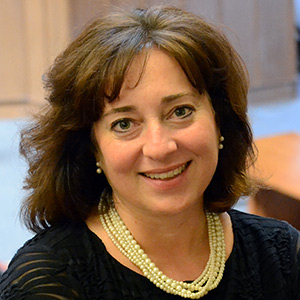 Ms. Judge joins the institution directly from Franklin University Switzerland (FUS) where she has served since 2017 as Vice President of Advancement and Special Advisor to the President. An exceptional institutional leader, Ms. Judge led the FUS Development team to become a driving force within the institution, and her tenure was marked by significant successes including exceeding a $10M campus campaign goal, securing the largest individual donation in school history, and cultivating a seven-figure gift to support the school’s first-ever endowed professorship.

Prior to her role with FUS, Anne Marie served as Assistant Dean for Institutional Advancement and Director of Annual Giving at Albany Law School in New York and as Director of Development for Albany Symphony Orchestra.

Throughout her previous roles, Ms. Judge has proved herself not only to be a tenacious and capable Development leader but a true all-around institutional asset. As Special Advisor to the President, her work at FUS extended to all facets of the university including recruitment, new partnerships, and career strategy, while her skills-set covers project management, grant writing, government relations, prospect identification & cultivation, and campaign planning. She also is proficient in Italian.

On making the announcement of Ms. Judge’s appointment, Scott Sprenger noted how important her experience of institutional leadership will be in providing a “fresh and broad perspective on building AUR’s advancement infrastructure and capacity.” He went on to remark,  “Ms. Judge brings an entirely new level of experience and professionalism to AUR. Her dedication to teamwork and inclusion, coupled with her outstanding philanthropic successes, will pave the way for a new era of development at AUR. I very much look forward to working closely with such a seasoned professional.”

Ms. Judge will be based in the United States but will be working very closely with the staff, faculty, and leadership of the institution in Rome. She stated, “In The American University of Rome, I see an institution ripe with opportunity. Given my experience and success, as well as my own Italian heritage, I believe I am the right person to help you build a stronger future. I welcome the opportunity to get to work. “

Ms. Judge will take up her role as Director of Development on July 1st