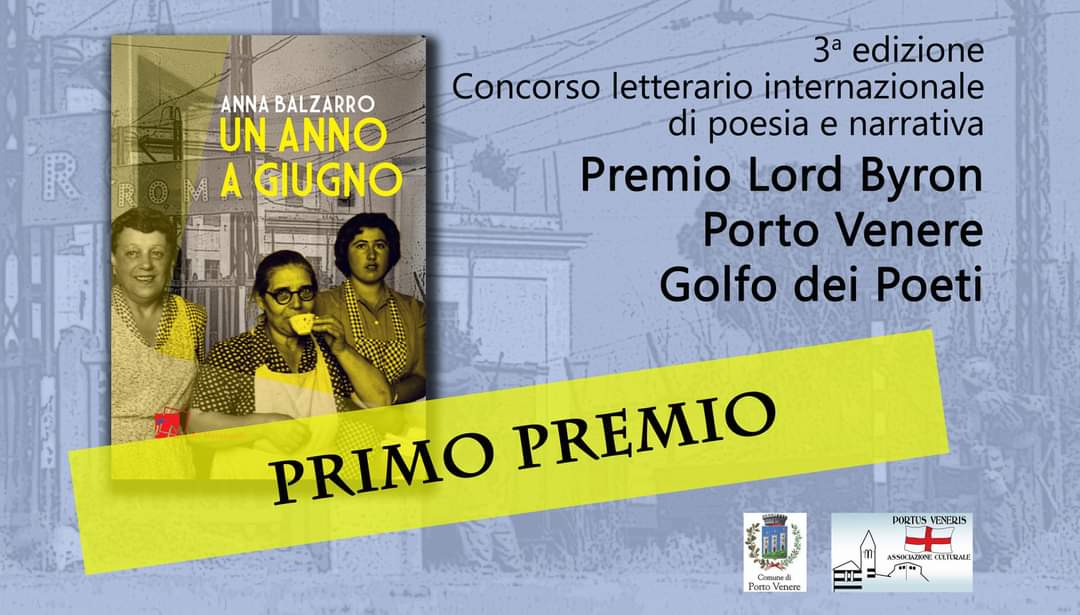 Many congratulations to Anna Balzarro, professor of Italian language and culture on AUR’s Italian Studies program, whose novel Un anno a giugno (“A year in June”) won the first prize in the published fiction category of the 2021 edition of the Premio Internazionale di Poesia e Narrativa “Lord Byron Porto Venere Golfo dei Poeti”. The novel was published in 2020 by Dei Merangoli.

The competition, now in its third year, awards prizes in eight categories in poetry and narrative to writers from around the world and is organized by the Cultural Association “Portus Veneris”. The goal of the Association is to bring about greater understanding and appreciation of culture in all its forms, with particular emphasis on poetry, literature, and art, through exchanges of ideas and works between people and cultural organizations.

The synopsis of Un anno a giungo reads:

Antifascists active in the Resistance and antifascists at heart, hardened or hesitant fascists, the characters interact with real historical figures, bringing together the exceptional nature of that period and the normality of the everyday: school, the struggle to find food, first loves, and fears that will only find answers after decades have passed.

The events of four families living in different parts of Rome are narrated in sequence in this novel. Binding together the narrative is the encounter with Stojil, a young Slavic man who, having escaped from the military prison at Alatri, arrives in the city in the convulsive period following the armistice of September 8th, 1943.

The Association is based in Porto Venere, La Spezia, and is rooted in the UNESCO World Heritage Site of the Cinque Terre. The competition is named after Lord Byron on account of the legend which told that the poet swam across the gulf of La Spezia, from Porto Venere to Lerici, to visit his friend Percy B. Shelley. While this event never actually happened, Byron and Shelley are just two of many authors, poets, and artists associated by legend or history to this part of Italy. It is for these reasons that of the eight prizes awarded in this competition, one is for poetry written in the local dialect of Porto Venere and another is for narrative that focuses on Lord Byron and English Romanticism.

Watch Anna being interviewed about Un anno a giugno in the video below.