Two short lectures in an evening celebration to mark the 10th anniversary of the passing of Terry Kirk, Professor of Art History at The American University of Rome, 1990-2009. 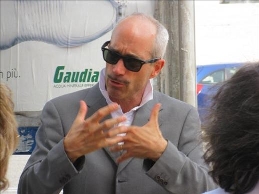 Terry Rossi Kirk was born on August 30, 1961, in Florida. He attended Université de Genève in Switzerland, Universität Wien in Austria and Università per Stranieri in Perugia, Italy. He received a B.A. with distinction in the major of Art History at Yale College, New Haven in 1984.  Kirk completed three additional degrees at Columbia University, New York in the Department of Art History: an M.A. in 1986, an M.Phil., in 1987, and a Ph.D. in 1997. During his lifetime, he collaborated with the National Endowment for the Humanities, the Institut de l’Histoire de l’Art, the Deutsches Archaeologisches Institut, the Yale University School of Architecture, the University of Lund, the Savannah College of Art and Design, and the Wagner Society of Rome.

Terry Kirk started working at The American University of Rome in 1988, teaching an introductory course titled “The Art of Rome”.  He worked closely with the faculty in his department and all of AUR, but most importantly, he is still remembered as a professor who changed people’s lives. His students remember his lectures as engaging and inspiring, his descriptions and explanations of art and architecture in Rome coming alive through his every word. A singer and a performer, he led students through the streets of Rome as if it were an open book, an eternal site that was only waiting to be discovered. His dedication and enthusiasm as a professor live on through the memories of all who had the honor of meeting and being taught by him.

“I‘ve never met anyone who loved and appreciated art as he did. If I remember correctly, one of AUR’s catchphrases was “the city is your classroom’’... well, he was the professor that would use every single aspect of the city and relate it to art! He didn’t teach in AUR ... He taught in Rome.”
Martina Demopoulou

Professor Kirk’s wry humor, his love of teaching, and his love of art inspired a fictional character in my novel, The Sculptor, featuring a study abroad student stalked by a serial killer in Rome. Kirk’s sincere desire to instill students with his same passion for Italian art is, for me, what made him larger than life. Not a day goes by when I don’t think of this professor above all others with sincere reverence and appreciation. I am so grateful for Professor Terry Kirk, in his scarf and long coat, not just for his professionalism but also for his inspirational life lessons.”
Gina Fava