This is the first article by Caitlin Walker, an undergraduate student of International Relations & Global Politics, who will regularly share her thoughts on being a student at AUR and living in Rome. 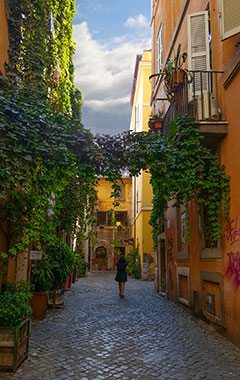 Not that we're counting, but I first moved to Trastevere in 2015 at the tender age of 18 and then back again in 2017. And although I've lived in a few different neighborhoods since then, Trastevere has always remained an integral part of my daily life in Rome. The intimate piazzas and dozens of restaurants, soft earthy lighting reflected off of rough clay walls and the patchwork of cobblestones carving through it all - it’s magic.

Whether in the summer with a cold Peroni and nights that never end or in the winter with red wine and a heat lamp, Trastevere is always there, tempting young and old alike to come out for an aperitivo (or three).

But even after all this time, I still can't tell you how to get to certain places in that neighborhood.

The beauty of a place like Trastevere is that it transcends what we think we know about streets and directions. It's almost unsettling. How can I turn left, walk straight, turn right, left and left again and end up facing the Tiber river when the Tiber was originally straight in front of me when I started? I can get myself to any restaurant, day or night or rain or shine.... but I can't tell you how I got there. The streets are not defined by right and left, but by slow curves and chaotic turns peppered with tourist shops and small alleyways stacked high with historic apartments, laundry waving in the breeze. If you’re down one of these narrow streets at the right time, you may find a nonna exiting one of the heavy wooden doors, off on some errand or another. I'm not even sure if they themselves understand how this part of Rome actually works, or if they too just know.

The streets are intuitive. It takes time. You can't use the river (or the tall trees that line it) as a guide because somehow the river is always straight ahead, even if you take a left and a left. There are no sidewalks or crosswalks, street signs or parking lots. It's just a winding river of cobblestones. Limp green ivy hangs low over certain sections, faded paint and old wooden doors line the space between the glittering restaurants and shops. These shops are a better guide than any map ever has been or will be for this place. A right at Graziella's, straight on past the museum and then you're in the bar district. A right at G-Bar and then slightly left at the fork in the road will take you to some great Mexican food. This neighborhood is consistent in its inconsistency.

That kind of otherworldliness and isolation traps Trastevere in its own little world. There are no buses through it, there are barely cars allowed at all. No huge grocery stores, no H&M. Trastevere feels intimate and small, known only to the select few lucky enough to make it a part of their daily routine. The outside chaos of Rome fades away as the warmth and stability of medieval buildings and streets sweep you up and into its heart.

When they say that all roads lead to Rome, I think they meant Trastevere.

All about the author


Caitlin is a 23-year-old senior resident student at The American University of Rome - her major is International Relations and Global Politics and she's adding a minor in English.

Caitlin originally hails from California but has spent the last 5 years living (on and off) in Rome.
She now writes for AUR and Wanted in Rome as well as running her own blog.

After graduating, Caitlin plans to let life surprise her (because Rome taught her that even the best-laid plans are subject to unexpected change ... but also that fate often has a way of turning out for the better...).