Archaeology, Heritage, and Conflict - a student report on the heritage of Ukraine.

Ukraine is home to 7 UNESCO World Heritage Sites. Of those, 6 are cultural sites and 1 is a natural site.

Professor Giulia Facchin's class, Archaeology & Classics 203: Global Heritage, is studying heritage and conflict, using Ukraine as a case study. Each student in the class has contributed a snapshot of a particular heritage site.

This message from the class "In this tragic moment, the Global Heritage Course (ARC 203) would like to share with the AUR community the seven UNESCO World Heritage sites that are located in Ukraine, and which represent its people and territories. Stop war. Build peace." 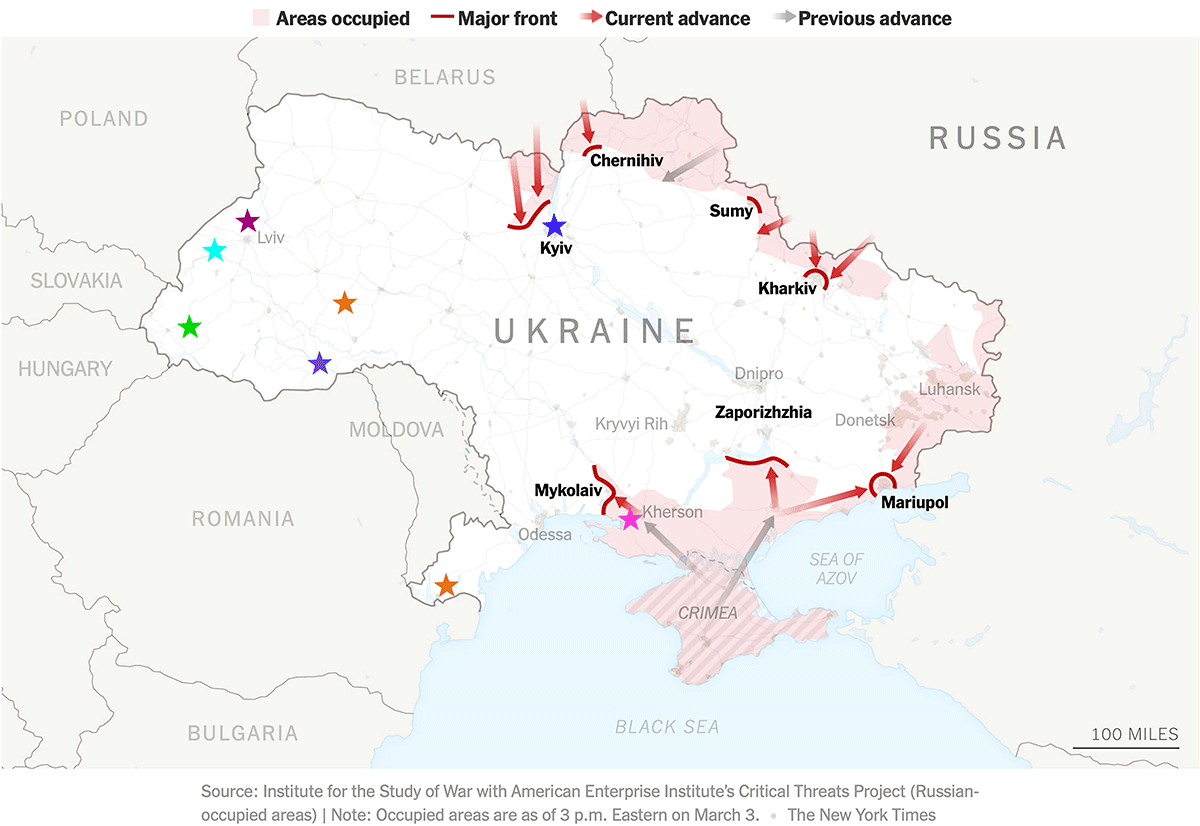 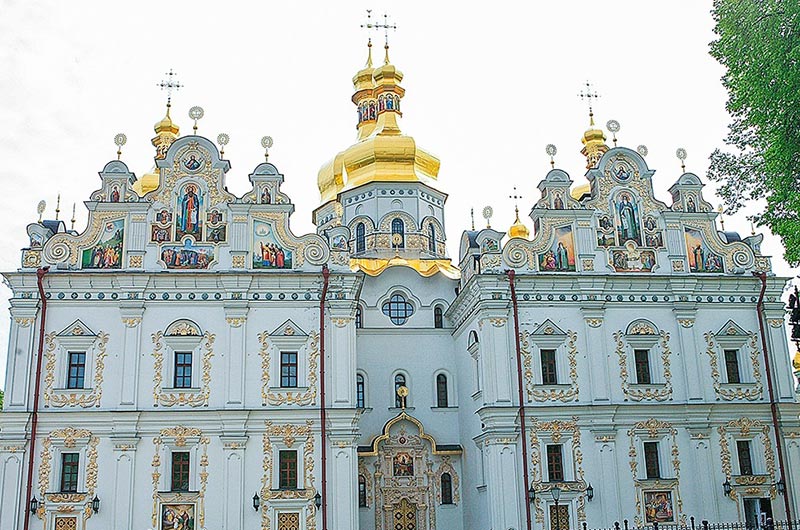 Ukrainian cultural history believes that Saint-Sophia Cathedral is the original Greek-Orthodox Cathedral built by the first Prince of Ukraine, Yaroslav the Wise, to rival the Hagia Sophia in Istanbul, Turkey. A separation of Christian values divided the Church into Catholicism and Greek Orthodox beliefs, resulting in a multi-religious significance. Located in the historic center of the Ukrainian capital of Kyiv, the UNESCO Heritage Site is an epicenter of “cultural interactions between the Kyivan Rus’ (the loose federation that was created between the 9th and 13th centuries), Byzantine Empire, and Western Europe” (UNESCO).
Kyiv is the symbol of the Orthodox religion.

The blue star on the map. 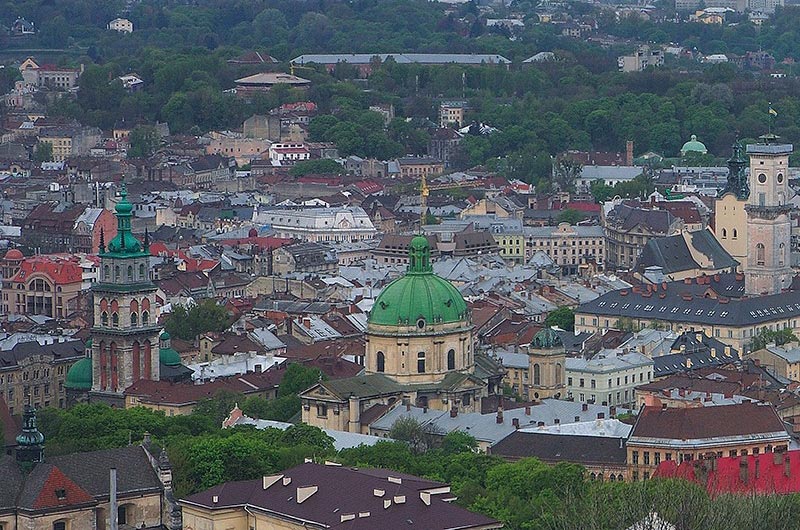 The area comprising modern Lviv, situated in western Ukraine has been populated since at least the early 6th century C.E. After a tumultuous early period for the region, the modern city was founded in 1256 and continued growing becoming one of the most important economic, political, and religious cities in all of Eastern Europe. Its admission into UNESCO’s list of world heritage sites comes from several incredibly well-preserved medieval structures demonstrating the unique fusion of architectural styles from Eastern Europe, as well as Italy and Germany, that combined in Lviv as it grew into a trade hub. The historical center is also home to several monasteries and residences that remain excellent examples of Baroque architecture.

The purple star on the map. 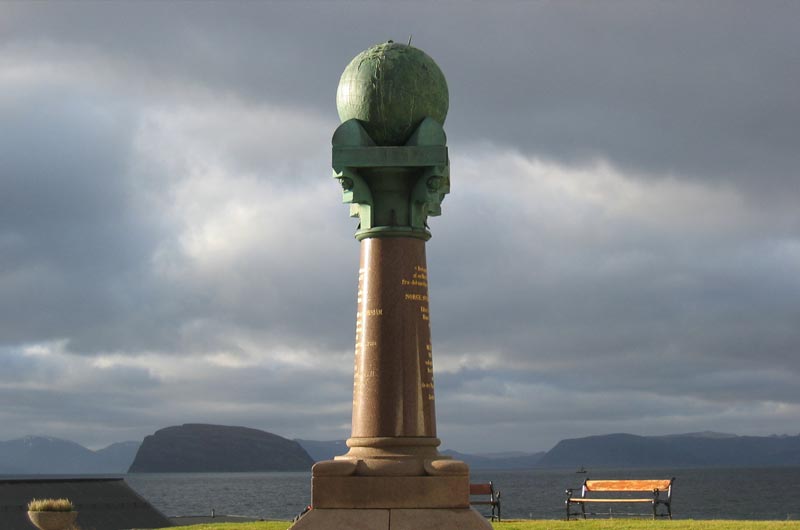 The Struve Geodetic Arc was built by Friederich Georg Wilhelm Struve between 1816 and 1855. It consisted of a series of 258 pillars displaced along one of the Earth meridians, from Norway, through Finland, Russia, Estonia, Latvia, Lithuania, Belarus, Moldova, to Ukraine, for a distance of 2,820km. It served to measure the land, where the pillars worked as a chain of triangulation along the meridian to accurately measure the size of the world, covering over 1,750 miles, throughout 10 different countries. It was the first technical and scientific object to be inscribed on the UNESCO World Heritage List as a universal example of “great technological innovation in world measurements” achieved by “bridging collaboration between scientists of different countries” (UNESCO).
Three of these pillars are not in imminent danger, due to the fact that they are more concentrated in the center of Ukraine. The fourth one is closer to the Black Sea, currently under Russian naval control.

The orange star on the map. 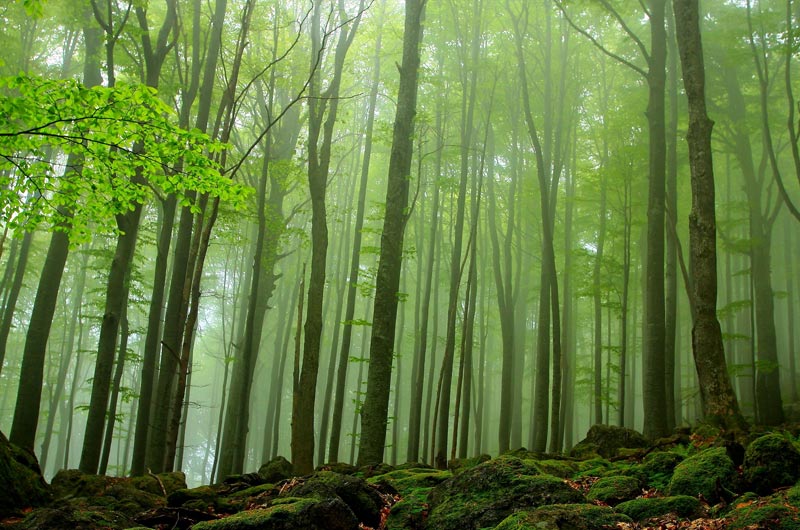 Ancient and Primeval Beech Forests of the Carpathians and Other Regions of Europe
https://whc.unesco.org/en/list/1133

The site is a transnational property that occupies 94 areas in 18 countries. The European Beech tree has spread from a few isolated areas to cover large amounts of land over a relatively short period of time spanning a couple of thousand years in a process that is still ongoing. The property is indispensable for the understanding of the history and evolution of the genus Fagus which, given its wide distribution in the Northern Hemisphere and its ecological importance, is globally significant.
Before the war in Ukraine, the main threats to the area were logging and habitat fragmentation. Further natural threats come from climate change as species composition and habitats are shifting. However, it should be noted that one of the attributes of the Outstanding Universal Value of the property is its demonstration of the ability of beech to adapt to different ecological and climatic regimes throughout its range.
The site comes close to many borders, including Poland, Slovakia, Hungary, and Romania.

The green star on the map. 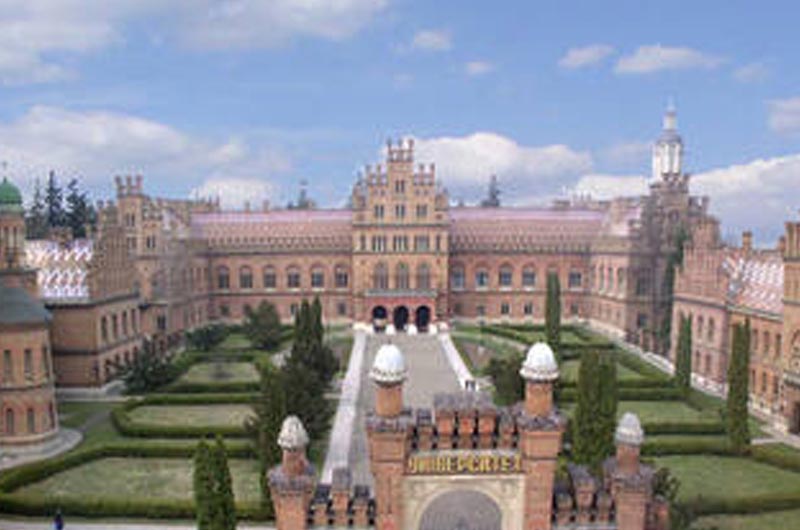 This was the residence of the Eastern Orthodox metropolitan bishop, at Chernivtsi, in Southwestern Ukraine. The ensemble included a seminary and monastery and was dominated by the domed, cruciform Church. It was built by the Czech architect, Josef Hlavka, from 1864 to 1882.
The building was inscribed within the World Heritage list in 2011 for its outstanding value as testimony to the cultural tradition of the Orthodox Church and as a masterpiece of historicist architecture.
Moreover, it exhibits an important interchange of human values as it reflects social, economic, and cultural influences on the development of architecture and urban planning that spans the Middle Ages, Absolutism, and the Gruender period.

The violet star on the map. 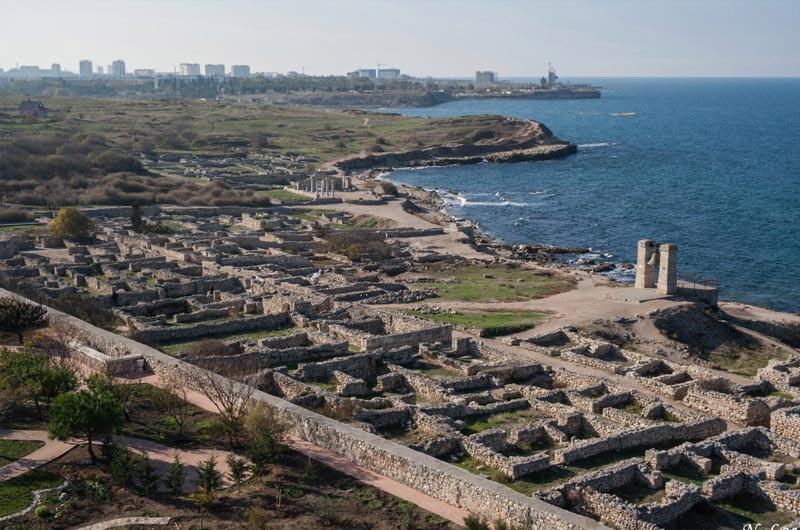 Ancient City of Tauric Chersonese and its Chora
https://whc.unesco.org/en/list/1411

Tauric Chersonese was a city founded by the Dorian Greeks in the 5th century BC located on the northern shores of the Black Sea. The place was inscribed in the World Heritage List in 2013 and includes both the urban remains and the fertile region around, the so-called Chora, which was in Antiquity structured in agricultural fields. This city has archaeological evidence from the Bronze Age through to early Christianity.
The site is under UNESCO patronage because of the ‘outstanding physical testimony to the exchange that took place between the Greek, Roman, and Byzantine empires and populations north of the Black Sea’. The site also represents a traditional human settlement with remains of ancient walls and farms giving insight into the lifestyles of its inhabitants and the agricultural use of the land.
The site is located in Crimea, which is currently under territorial disputes. In 2014 Russia illegally annexed Crimea from Ukraine because of its access to the sea.

The pink star on the map. 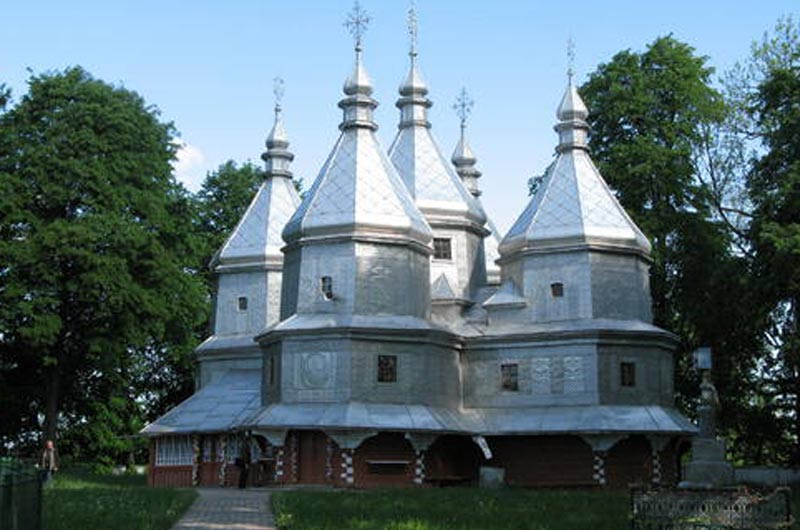 Wooden Tserkvas of the Carpathian Region in Poland and Ukraine
https://whc.unesco.org/en/list/1424

Located on the eastern fringe of Central Europe, the sixteen Tserkvas (churches) were built between the 16th and 19th centuries by the Orthodox and Greek communities in the distinct tradition of creating architecture using only horizontal wooden logs and timber-building, a technique still used in the Slavic countries nowadays. Key to the tradition of Tserkvas are iconostasis screens, interior polychrome decor, and historic furnishing conforming to the requirements of the Easter liturgy while reflecting the cultural traditions of local communities that have developed separately in the mountainous terrain. The authenticity of the property and site is determined by location and setting; furthermore, 13 tserkvas are still used as churches, while the other three – Radru, Rohatyn, and Drohobych – are preserved as museums.
Because the structural timbers have been meticulously mended using traditional ways over the years, the authenticity of the materials has remained constant. In Ukraine all nominated properties are protected at the highest level by inclusion on the State Register of Immovable Historical Monuments under the State Law on Protection of Cultural Heritage (2000).
The churches are located within a mountain range, and are therefore difficult to reach.

The turquoise star on the map.

Following the adoption by the United Nations General Assembly of the Resolution on Aggression against Ukraine, and in light of the devastating escalation of violence, UNESCO is deeply concerned by developments in Ukraine and is working to assess damage across its spheres of competence (notably education, culture, heritage, and information) and to implement emergency support actions.

The UNGA Resolution reaffirms the paramount importance of the UN Charter and commitment to the sovereignty, independence, unity, and territorial integrity of Ukraine within its internationally recognized borders, and it demands “that the Russian Federation immediately cease its use of force against Ukraine.”

The Director-General, Audrey Azoulay, fully concurs with the opening remarks made by the Secretary-General at the Special Session of the General Assembly, during which he said that “this escalating violence -- which is resulting in civilian deaths, including children – is totally unacceptable.”

In addition, she calls for the “protection of Ukrainian cultural heritage, which bears witness to the country’s rich history, and includes its seven World Heritage sites – notably located in Lviv and Kyiv; the cities of Odessa and Kharkiv, members of the UNESCO Creative Cities Network; its national archives, some of which feature in the UNESCO Memory of the World Register; and its sites commemorating the tragedy of the Holocaust.”

Consistent with its mandate, UNESCO demands the immediate cessation of attacks on civilian facilities, such as schools, universities, memorial sites, cultural and communication infrastructures, and deplores civilian casualties, including students, teachers, artists, scientists and journalists. These include women and children, girls especially, disproportionately impacted by the conflict and displacement.