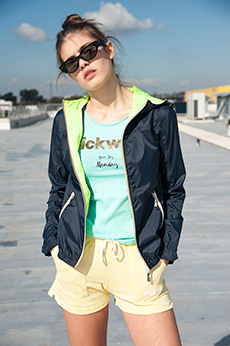 Students in the Global Fashion Marketing class met recently with company officials from Pickwick Colour Group, an Italian sports/streetwear apparel company based in Rome. Wearing their Pickwick T-shirts, the students impressed the executives with professional presentations and detailed marketing plans to re-launch the product in the USA.

While many millennials were just being born, Pickwick was in its glory years in the 1990s in Italy.  It’s founder, Diego Barbaresi, attended the presentations and was encouraged by what he saw. “It’s nice to know that this new generation is still inspired by the brand,” said Barbaresi, “and that it’s still appreciated. It shows the work we did back then to establish the line and its message still has value.”

In fact, the students regarded Pickwick’s “vintage” quality as a selling point, along with its good value ($25 T-shirts made-in-Italy). They also liked its versatility, as one student put it, “You can wear it to a party or to bed.”

The presentations were the final project in an intense four-week summer course on Global Fashion Marketing, taught by Anna Sasso, full-time Lecturer in Business Studies and coordinator of the Travel and Tourism Management major. AUR’s Business Administration program recruits local and international firms to give students real-world case studies and clients. It’s a win-win where students apply the theories they learn in class -- developing skills in teamwork, problem solving and presentations along the way – and businesses find  fresh ideas.

And what better place to study fashion than in Rome, a world fashion capital and headquarters of Bulgari, Fendi, and Brioni, just to name a few.

“I learned a lot about high-end luxury market strategies and how they appeal to customers’ wants and desires, rather than their needs,” said student Madison Diluccia, from California. “It’s inspired me to look into fashion marketing as a career. I’ve always had a love for fashion and being in Italy, where so many large fashion brands were born, added a lot to my history of the industry. I learned a lot about brands that you don’t see in the States and are up-and-coming.”

The challenge
Barbaresi founded Pickwick in 1993 in Los Angeles, taking inspiration from American culture and the city’s streets, beaches, skateboarders, and surfers. He mixed California style with Made-in-Italy designs to create basic, but trendy T-shirts, sweatshirts, and jackets.
Emblazoned with “Pickwick” in collegiate lettering and the slogan “Fearless” in English, the clothes appealed to young generations of Italians looking for something new. (The name came from Charles Dickens’ novel, “The Pickwick Papers.”)

Today, however, Pickwick finds itself in a crowded streetwear market with big competitors, like Nike and Adidas. Being Italian, can it find a new niche for itself among Americans aged 15-30? The simple answer is “yes” according to research and analysis done by AUR students who had to create a new brand personality for Pickwick for the US market. The company challenged them to: develop a brand positioning strategy; identify the target consumer; which products to feature; suggest product changes or new features in style or fabrics; and finally, decide what is important, “made-in-Italy,” “designed in Italy” or neither?

In addition to the basic 4Ps (product, promotion, price, and place), the students also had to incorporate elements of social responsibility and sustainability to add value to the product. It was a lot to put together in about two weeks, with 15 students divided into five teams.

“I’ve never been a team leader before, organizing everything,” said Ginevra Laetitia Laurora, who is studying Business at AUR. “It helped me understand how to approach people and handle their time constraints and attitudes towards the project.”

On hand for the presentations, along with Barbaresi, was Eleonora Giancarli, web marketing and communications manager, and Massimo Acerbi, CEO of Innova, which owns the Pickwick brand. Innova is a top Italian distributor of Fruit of the Loom, Russell, and American Apparel, as well as Pickwick’s made-in-Italy clothing supplier, Vesti.

Digital natives at work
The millennial generation (born between 1980-2000) are known for their innovative thinking, ability to multi-task, and ease with the technology. They are often called “the digital natives” since they grew up speaking the language of computers, video games, and the Internet. This was evident as the students easily moved between Powerpoint slides, Excel-generated graphs and charts, YouTube videos, and hand-drawn storyboards for advertising campaigns on social media. They analyzed the competition with marketing models, from S.W.O.T. (strengths, weaknesses, opportunities, threats), to PESTLE (political, economic, social, technological, legal, environment) to AIDA (attention, interest, desire, action) or the consumer process from first noticing a brand to buying it.

This was due also to the students’ geographic advantage. Coming from across the United States and internationally, they were able to add real-time insights into youth culture from coast to coast and put their finger on the market’s top influencers.
“It was really challenging working with a brand that had success but then lost it in their original market, to take it from a niche to more general,” said student Jack Burger, from New York City. His team placed Pickwick next to Louis Vuitton, mix-and-matching Italian fast fashion (“simple, sleek, and edgy”) with luxury. They envisioned a young, sophisticated, artsy, New Yorker as their main client, launching the product in one of NY’s trendiest neighborhoods, NoHo. They found made-in-Italy to be a strength, using “born in Italy, inspiring the world,” to counteract a weakness that “American-Italian culture is different than authentic Italian.”

Another team pitched New York as well, appealing to “rooftoppers” -- individuals who take selfies or videos from vertigo-inducing heights and dangerous locations, usually off-limits to the public, like the roof of a skyscraper. “Trendy, but still underground,” was how they described the brand’s appeal. They also identified the company’s “Fearless” concept as a bridging theme, speaking to strong millennials that go against the crowd and push boundaries, from “urban explorers” to beachy “California Millennial Outcasts.”
“Kids don’t want to identify with large social groups, like hipster or hip-hop,” said one student from Southern California who team proposed re-launching in beach communities there. “They want to create smaller groups, be multi-dimensional, have a feeling of independence.”

Other students picked up on Pickwick’s slogan as “Action Apparel” and placed jackets (at $75-$150) among the top product for snowboarders, dancers, DJs and other active types in cold climates (like Colorado, Oregon, and Utah). They even conducted an online survey, gathering 34 respondents, to test the “made in Italy” factor; the result was “general disinterest” from their target buyers. However, young people would be interested in buying products that support their top issues, identified by the students as the environment (especially climate change and recycling) and public health (ranging from human rights to helping veterans with charities like Wounded Warrior).

Grabbing the client’s attention on sustainability, one team explored using a new fabric, made from discarded orange peels from Sicily, with a campaign, “Orange you glad we care.”

The clients were also impressed as the students brought to life the company’s mascot -- a spiky-haired, black-and-white stick figure, known as “Little Pick” –with a cartoon and rebellious back-story. The non-gender character added to the “gender-fluid” or uni-sex style of the clothing, they said.

After three hours of presentations, Innova CEO Acerbi said he was very happy with the students’ work.
“The presentations were structured in a very professional and technical manner,” said Acerbi, adding that he wasn’t expecting that from students. “We were looking for feedback from this generation and they definitely gave us some good ideas. We presented them with a broad assignment, but knowing now how they work, we’ll ask them for even more specifics next time.”

The company’s web marketer, Giancarli, thanked the class, saying, “We really appreciate all you have done for this rebranding project. We are impressed by the good quality of your work and the attention you showed to our needs.”

The company awarded each student a certificate of appreciation and more “chill” Pickwick gear – just in time for summer vacation.