'Steven D. Lavine – Failure Is What It’s All About. A Life Devoted to Leadership in the Arts', by Jorn Jacob Rohwer, will be published on November 17th 2020 by Deutscher Kunstverlag.

AUR Trustee Steven Lavine is the focus of a new work by Jörn Jacob Rohwer, Steven D. Lavine – Failure Is What It’s All About. A Life Devoted to Leadership in the Arts, in which the award-winning author compiles his conversations with Lavine, discussing his life and career. Lavine joins an esteemed cohort of luminaries from the arts, science, and society who have been interviewed by Rohwer, who is known for his writing style that combines literature and journalism.

The synopsis for the book reads: 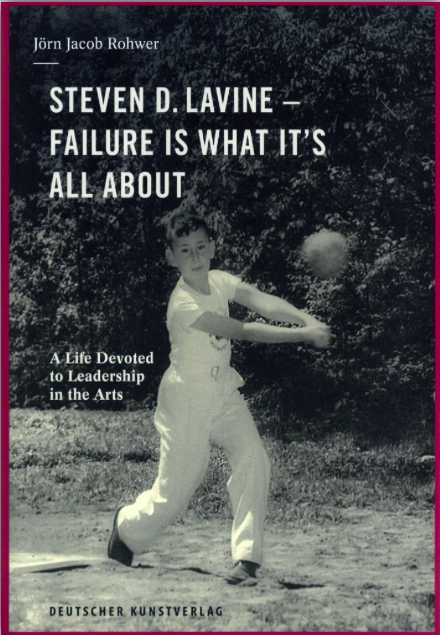 Walt Disney's vision for an art school located before the gates of Los Angeles became a reality: Opened 50 years ago, the California Institute of the Arts had long been in crisis, before Steven D. Lavine led it to financial prosperity and international acclaim. Today, CalArts is the cradle of many Academy Award and Pulitzer Prize winners, of Mellon and Guggenheim Fellows – a hotspot of American creativity.

In personal conversations with Jörn Jacob Rohwer, Lavine tells his life story for the first time, talking about cultural politics, philanthropy, the avant-garde and Los Angeles at the centre of his life. Spurred on by self-doubts and a desire to learn from failure, he proves to be a sensitive thinker, visionary and transatlantic mediator between the worlds of art, politics and education.

The third section of this book is dedicated to the California Institute of the Arts, where Lavine served as President for an astounding 29 years, a tenure that demonstrates just how fitting the notion of “Leadership in the Arts” is for him. When he assumed the role of President of CalArts in 1988, he faced a steep upward challenge: not only was it his first post at the helm of an institution, it was an institution that was undergoing a period of great financial instability.

It was, in fact, Lavine’s liberal arts background that singled him out for the role from a pool of candidates whose careers were rooted in business, as he told the Los Angeles Times in an interview in 2017. Having succeeded in steering CalArts out of financial ruin, it was not long before the institution faced another crisis: the 1994 Northridge Earthquake, which devastated the campus and threatened CalArts’ future. He recalled to the L.A. Times: We had this [campus-wide] meeting on the front steps of [CalArts] because we couldn’t go inside. I remember telling [everyone], “We are going to go on. For those of you who stay, this will be the most important semester in your life. It will prove that you can make art no matter what happens” – a sentiment that rings just as true for our students today, as it did to CalArts’ students in 1994.

In addition to his success in helping CalArts survive the 1994 disaster - and emerge from it stronger - Lavine is credited with instigating “a sustained period of growth in programs, enrollments, reputation, and financial stability”, and among his proudest achievements as President are the diversification of the student body, the establishment of a community outreach program, and the establishment of REDCAT (the Roy and Edna Disney CalArts Theater).

His leadership in the arts has continued since his presidency at CalArts concluded in 2017: he was appointed Founding Director of the Thomas Mann House in Los Angeles, an organization established with the objective of providing a hub for dialogue and exchange between German and American scholars on pressing contemporary issues, especially the future of democracy.

No doubt Lavine had endless stories to choose from in his conversations with Rohwer on leadership in the arts, and this publicaton will offer a vivid insight into the world of institutions that promote the arts and humanities.

Steven D. Lavine – Failure Is What It’s All About. A Life Devoted to Leadership in the Arts, by Jorn Jacob Rohwer, is published today, November 17th, by Deutscher Kunstverlag.