New contemporary artworks by AUR Adjunct Professor in Fine Arts, Marina Buening, will be on exhibit at StudioTiEpolo 38 gallery, culture club and lounge bar, in Rome, from Sept. 21-Oct. 27. Free and open to the public. 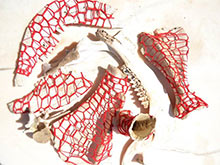 The exhibit is also part of RAW - Rome Art Week - from October 22-27. The event, now in its 3rd edition, is dedicated to contemporary art in the capital with the aim of building a network of exhibition spaces, artists, critics, curators, scholars, collectors, and enthusiasts. The week offers the public an overview of Rome’s contemporary art scene with events, open studios, and cultural projects, selected through an application process. All events are free. Info: https://romeartweek.com/it/raw/

Buening’s exhibit, Terra Incognito (Unknown Land), is about man’s relationship to nature and begins with the work, “The Green Man is Very Angry,” almost as a manifest.

She finds a notable reference point in the work of Albrecht Dürer (Great Piece of Turf, 1503), a still life of a seemingly unordered group of wild plants. Seen growing out of the ground, the plants are not very prestigious but simple herbs. Perhaps a search for the secret forces of nature?

Buening also looks for the land we don’t know yet and of which we don’t have a map, a land we want to explore and take risks to enter. Perhaps we may find there “A Good Place To Die,“ a large installation made with bones and grass slowly growing. Or we can explore “Com’è Profondo Il Mare,” (How Deep the Sea is), another large installation.

Her prints and photos play with the archaic beauty of nature but also with the threat of entering the wilderness. But there is hope. If we have the courage to enter the wilderness inside ourselves, then the outer wilderness becomes less frightening and we will find some life again.

This is what happens in the prints. The part of yourself, which has been threatened by our lifestyle, tries to withdraw and hide in the deep wilderness. Chaos and emotions may be attractive, but at the same time are frightening. So, she offers the public the opportunity to enter themselves and you never know – perhaps a lion, a deer or a unicorn may jump out of it. In the end, the “Green Man” might release a bit of his anger.

An inauguration will be held Sept. 21 at 4 p.m and is free and open to the public. https://www.studiotiepolo38.it/gallery/marina-buening-terra-incognita/

About Buening
Professor Buening was born and raised in Northern Germany. After studying economics in Hamburg and also working in this field, she became an artist while in her 30s. She studied art with several professors in Germany, including Jan Koblasa, A. Radovani, Katherina Duwe. Her first exhibitions were in Germany, followed by several in Denmark and France. She has lived in the Rome area since 1998.

She has continued to exhibit in both Germany and Italy, participating twice in the NordArt of Büdelsdorf, and twice at the Kunstverein Buxtehude, each time with a large installation.

Earlier this year, she was in a group installation, Under the Same Roof, at Sala I Rome, which was replicated in August in Washington, DC at IA&A Hillyer Gallery entitled, Under Another Roof.  She has had several solo exhibitions, including recently at the St. Stephen's Cultural Center and Studio Tiepolo gallery38, both in Rome. In 2016, she was selected for the exhibition, Oltre i Libri, (Beyond Books) in the Biblioteca Angelica, Rome.

Buening joined AUR in 2012 and teaches Intermediate Drawing, Printmaking, and Italian Sketchbook: Images of Rome, a popular course in which students go on site to sketch the city’s most famous landmarks and viewpoints.

Two photos from the opening of Marina Buening’s show: 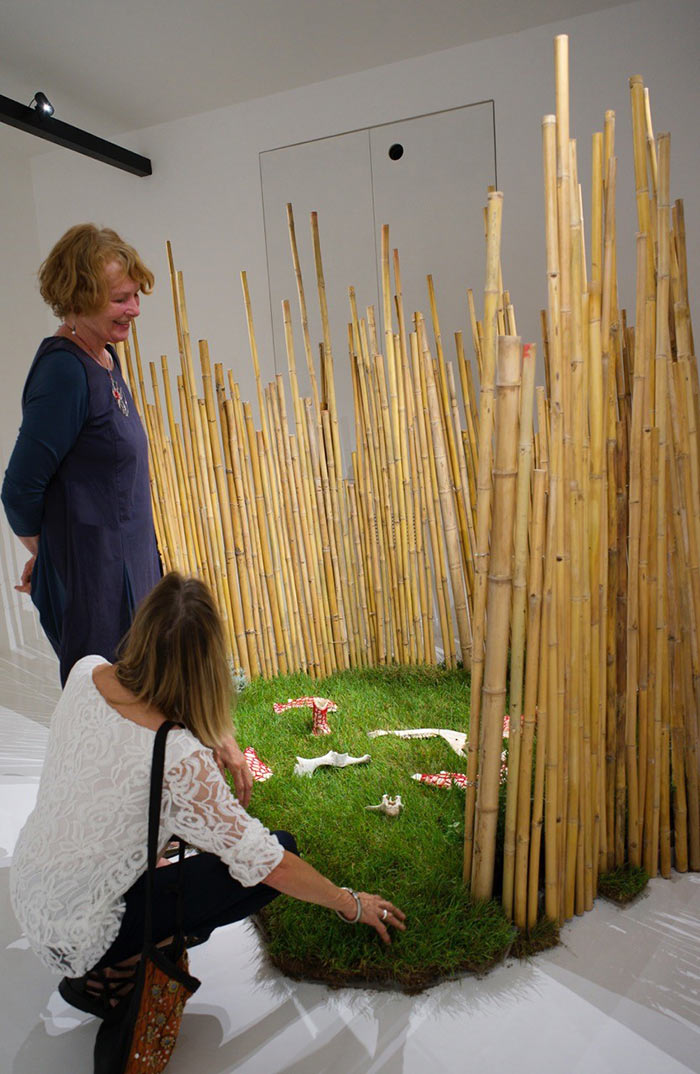 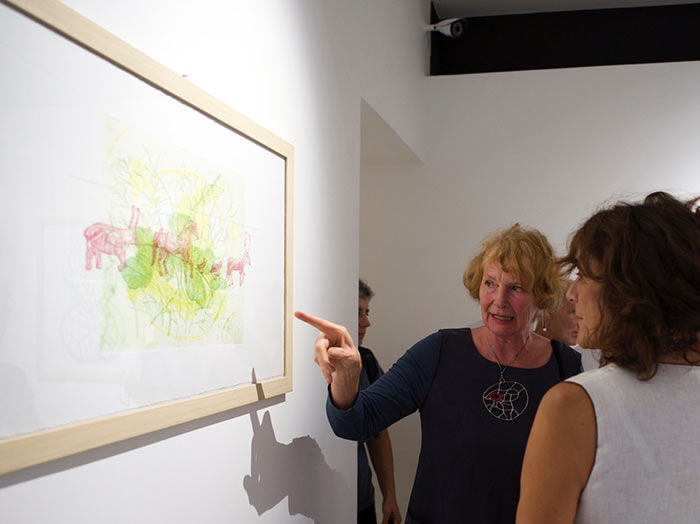