We interviewed Griffin Evans, who graduated from AUR in 2005 with a BA in Art History - the first AUR student to do so! Griffin transferred to Rome from Boston, and soon after graduating he trained to be a lawyer. We spoke to him about his AUR days and the path he has followed since then. 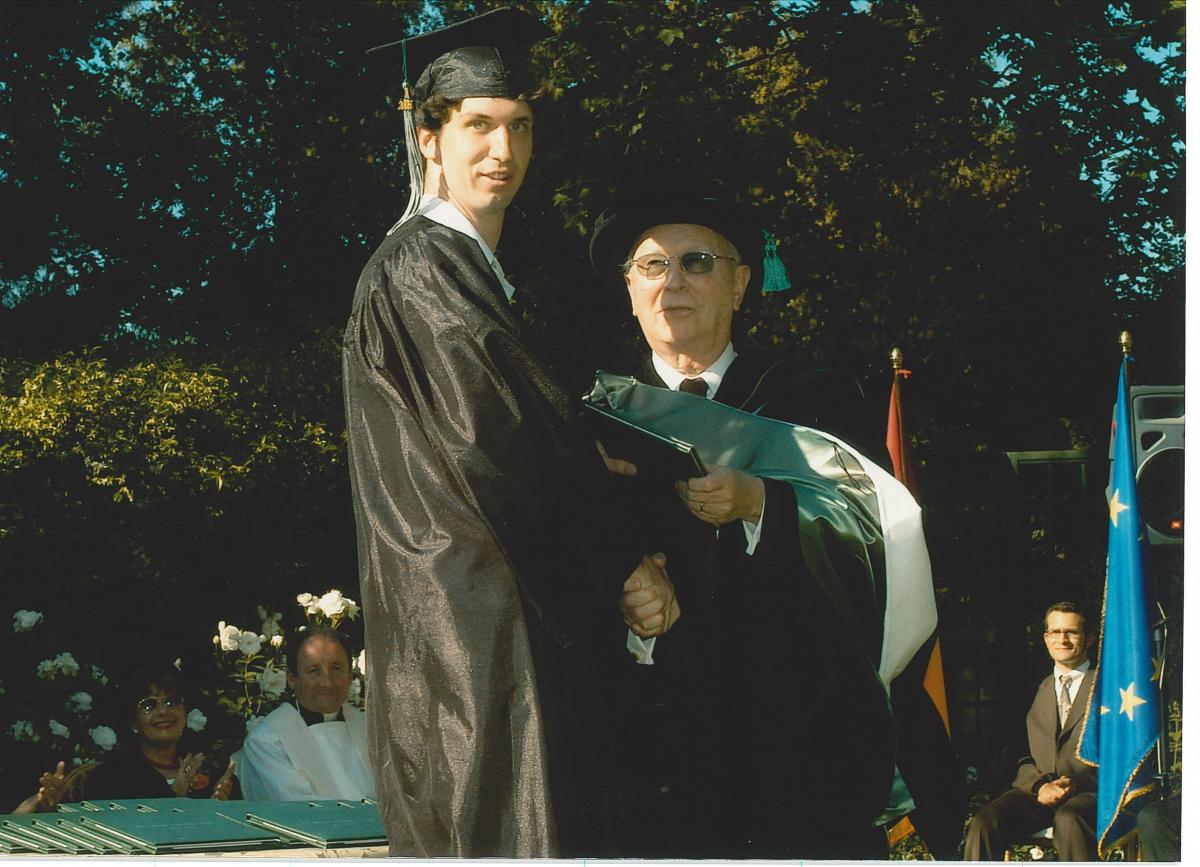 You transferred to AUR halfway through your undergraduate studies at Boston University. What prompted you to make the move?
I chose Boston because I’m from Philadelphia originally and I thought Boston and Philadelphia were very similar – but they’re not! It’s much colder in Boston and it’s very dark, and I didn’t really like the university very much: it was too big for me. My sophomore year came around during the Iraq war and I decided I was skipping the country. I took Latin in high school, and we went to Rome during my senior year, so with that background in Latin and classical learning, Rome was an obvious choice – especially as I was looking for better weather! I put in my application for AUR and I told my friends that if I got in, I was going.

What do you remember about the beginning of your AUR experience?
It was 2003: I arrive in Rome and it’s the hottest summer on record in Europe. It’s August, nobody’s here, I’m sweating, and I can hear ambulances going down the street, and I think “What have I done?” Luckily, it cooled off in September and it was smooth sailing from there.

What was the highlight of studying Art History at AUR?
I was AUR’s first Art History graduate. They launched the degree during my junior year. I had done a lot of History of Rome and Renaissance classes as well as the Introduction to Art History class, so I was able to make the switch. My senior year was intense on Art History, I did my capstone with Paul Gwynne and I got through it. It was really great, because the department was growing – and of course, you got to study art history in Rome!

I remember how the professors would take us on the train to Florence, we would go and see Michelangelo’s David in the morning and be back in Rome for dinner in the evening… It was just amazing. Many of my friends who went to Ivy League schools couldn’t match that experience – there’s no comparison. You wish everyone could come and do it... But there’s only so much room!

Following AUR, you made the jump to law school. What led to that decision?
It didn’t happen right after graduating. I came back to the States and got a job doing document production for law firms, so I started handling legal documents. I did that for about three years, but I got tired of paper-pushing and wanted to go back to school. Law school was a great experience because I got to travel a lot. I went to Cambodia and France, and I got to study European Union law and international human rights, which made sense for me, having lived in Rome – perhaps more so than for people who hadn’t ventured out of the country.

Has there been much crossover from your Art History degree into your legal career?
I’m an estates lawyer, so I am often asked by clients if their items are real, or worth anything. I once did an appraisal of an art collection and was surprised to see had got the Greek gods wrong! The research and writing skills needed to be a lawyer, I improved on a lot at AUR. I’m constantly upgrading my ability to write, read, and analyze texts.

Have you come across anything in your career that took you back to AUR?
A lot of the instincts that I learned from living in such a historic culture as Rome I now apply in my legal practice. I often represent parents in scenarios that are emotional, highly contentious, and bitter. I have to convince the judge of their humanity. I feel that my European roots and education in Italy really helped me to be able to formulate those thoughts and convey them accurately to a judge.

What do you miss from your AUR days?
I miss the city, and I miss walking everywhere. I lived in Trastevere, and we would go across the Ponte Sisto and wander around the town. I miss the Pantheon! I come back to Rome I’ll be in the courtyard, annoying Paul Gwynne.

If you could give a piece of advice to your younger self as you were about to start at AUR, what would it be?
I wouldn’t change much, honestly. I didn’t do it perfectly, but I wouldn’t change anything. I guess the only thing would be to hand papers in on time! Going out and seeing all the people and the sights – it’s hard to sit with your head in a book when you’re in Rome. But rather than giving my college-self advice, I wish someone had told me when I was at high school that going to Rome was a choice. I went to a preppy private school, and it was all directed towards Ivy League schools and small liberal arts colleges. I wish someone had said, go to Italy, go to Europe, go to Rome.

The Future of Digital Politics. #4 in the 'Future Media' lecture series.
When in Rome: A conversation with Student Life at AUR.
The history & culture of Cinco de Mayo with Dr. David Hayes-Bautista
Costi per studiare all’AUR
American Master's Programs in Europe - AUA Information Session - May 2021
Finance your education. Q&A session with the Financial Aid team.
More Events