While working on a chapter for the recently published The Italian Legacy in Philadelphia: History, Culture, People, and Ideas (Temple University Press, Sept 2021), Professor Colletta discovered new information about one of the residents eternally resting in the so-called Protestant Cemetery in Rome. The grave of Hartman Kuhn is fairly nondescript, but it turns out that he was connected to one of America’s most famous families, and his premature death tells us a lot about American Grand Tourists in Rome in the nineteenth century. 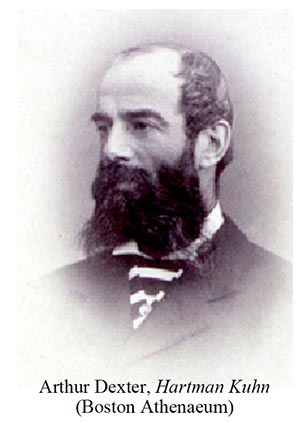 Hartman was the brother-in-law of Louisa Adams, sister to Henry Adams, and granddaughter and great-granddaughter of two American presidents - John Quincy Adams and John Adams. She was married to Charles Kuhn and they were at the center of a lively and intellectual expatriate community in Florence. Because he married an Adams, the life of Charles is fairly well documented, but we know less about Hartman because he died so young, and the cryptic inscription on this gravestone shed little light on how he died in Rome.

Professor Colletta solves the mystery and further explores the lives of the Kuhns and other famous American grand tourists in her most two recent publications. The first article, Hartman Kuhn, “an awfully nice fellow” from Philadelphia, is published in the Summer 2021 edition of the Friends of the non-Catholic cemetery in Rome newsletter and is kindly made available for you to read here.

To access the second article, you should avail yourself of a copy of The Italian Legacy in Philadelphia: History, Culture, People, and Ideas. Edited by Andrea Canepari and Judith Goode and published by Temple University Press, this book attempts to showcase the rich contribution of Italians and Italian Americans to Global Philadelphia through essays and images.

Italian arts and culture have been a significant influence on Philadelphia dating back to Thomas Jefferson and colonial times. Throughout the ensuing decades, Italian art and architecture styles flourished, and wealthy Philadelphians traveled to Italy and brought back objects to display in emerging institutions of art and culture. New immigration formed neighborhoods—such as South Philly, home to the Italian Market—and Italian business leaders, politicians, artists, musicians, and sports figures came to prominence and became part of the social fabric of the city.

This glorious volume celebrates the history, impact, and legacy of this vibrant community, tracing four periods of key transformation in the city’s political, economic, and social structures. The editors and contributors chronicle the changing dynamics of the city as Italian immigrants established themselves and as they continue to have lively interactions with people and institutions in Italy.