The Discovery Channel’s popular archaeology series, ‘Unearthed’, now in its ninth season, features AUR professor, Valerie Higgins, in an episode first broadcast in the US on the Science Channel on July 11th. Professor Higgins made her contribution to an episode on Roman amphitheaters but instead of talking about Rome’s Colosseum, she looks at how provincial centers, like Capua, provided the model for many later amphitheaters. Today, Capua, near Naples, is a small city, getting only a fraction of the visitors of the Colosseum but in the Roman period, it was an important military center with prestigious gladiator schools, and, famously, the starting point for the slave revolt led by Spartacus.

From Valerie’s perspective the fact that the program got to the screens was, in itself, something of a minor miracle given the covid restrictions in place at the time of filming:

“When Windfall Productions approached me to take part in this program I was so pleased because the opportunity to go to Naples felt like a release from the stifling restrictions we were all living under in Italy but I had not reckoned on how testing it would be. Pre-filming, there was a lot of bureaucracy concerning covid precautions and proof that my journey was strictly necessary for work purposes. Unfortunately, at the last minute, none of the original team from Windfall who planned the program were allowed to travel to Italy so local people were drafted in to take their place. Amazingly, the director managed to direct filming over the phone from her home in Britain whilst simultaneously juggling a family in lockdown. 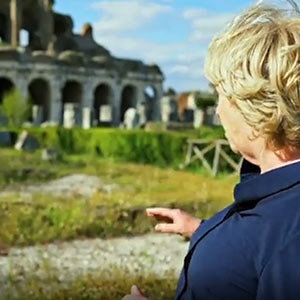 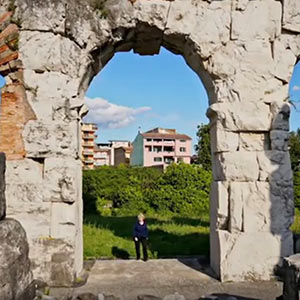 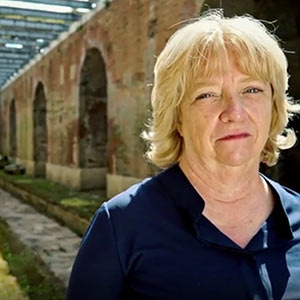 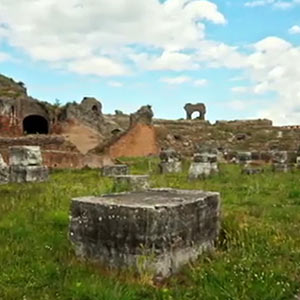 When I arrived in Naples and exited the train station, I found a city of deserted streets that were totally silent, and in Naples that is truly an eery experience. I was met by the fixer who, in non-covid times, worked on programs with the survivalist and explorer, Bear Grylls, so when he told me that he could not find anything open and was concerned about how we were going to eat, I realized that it was time to start worrying. Fortunately, we did not, in the end, have to use his knowledge of how to survive by eating insects.

What was eery in Naples was captivating in Capua. The lack of visitors to the site made shooting a dream. Not only did it make filming easier in a practical sense because we did not have people coming into the shot, but the absence of people also threw into sharp relief the imposing structure of the amphitheater, set against the mountains in the background. We filmed on a beautiful spring day with brilliant sunshine, a lapis lazuli blue sky, and deep green vegetation. It felt magical having the whole site to ourselves. Capua is a little out of the way and even without covid it is a trek to visit but it really is worth the effort. It was a great experience and I hope we managed to capture something of the fascination of this site in the finished program.”

'Unearthed' can be seen on the Science Channel in the US on Sunday evenings at 9 pm. The episode on amphitheaters was first broadcast on Sunday 11 July 2021. It will be broadcast on European channels in the coming months.