Professor Villani is rightfully recognized for his long-term commitment to his film projects. This year he spent part of his summer as an Artist-in-Residence at ArtMill Center for Sustainable Creativity in the Czech Republic. During his stay, he created several video interviews for his new film project, Soldiers: Six Stories, Six Wars, currently in post-production, and had a new photographic exhibit entitled “Secret Windows, Hidden Mirrors” reflecting his experience at ArtMill.

Soldiers is a 70-minute documentary film featuring interviews with men and women in uniform ranging from WWII veteran Harry Shindler to soldiers from more recent conflicts like Vietnam, Kosovo, and Afghanistan. “It’s a way for viewers to get into the hearts of a group of people in uniform and gain an awareness of some of the issues pertaining to the military, keeping as far away from politics and personal judgment as possible,” said Villani.

About his photographic installation Villani says, “One of the first Czech words I learned during my residency at the Ceverny Mill is “práh,” or threshold, and “na prahu” which means at the threshold,” said Villani. “Mirrors and windows seemed like fitting metaphors of the nature of my perception while at the Mill and a suitable key to free artistic expression. Existing in a new and unusual world -- and reacting to it with not enough time to blend in -- triggers an experience that, although based on reality, may only exist in the artist’s imagination as one identifies connections with one’s life, places, and background.”

Before leaving the exhibition, visitors were asked to choose and take home a small print of the picture that most directly spoke to them, giving it a new title of their choice and explaining how it connected with them. “Through exposure to the work viewers hopefully had a similar experience and shared this vision/assumption, freely choosing the window that most directly speaks to them and the mirror that most closely reflects and motivates that choice,” added Villani.

Since its inception in 1989, ArtMill has promoted dialogue between cultures, and since 2005 it has invited one or two working artists each summer to come and enjoy the luxury of time and space to focus on their projects. Generally, the theme is related to an aspect of ArtMill's mission or genii loci, Latin for the spirit of a place.

As for place, ArtMill is “in the middle of nowhere” to quote its website -- about two hours from Prague, on a working farm set by a lake and near the Šumava National Park – but it affords just the right mix of solitude and stimulation to inspire creativity. With renovated farmhouses (including its namesake 16th- century mill) and return-to-nature, sustainable practices, the center attracts international artists, visitors and students for workshops, collaborative projects, exhibits and retreats. It also hosts university programs, scholarships, work study and summer camps in art, performing arts, sports, nature, and languages.

Learning from a master, Professor Villani on Wim Wenders 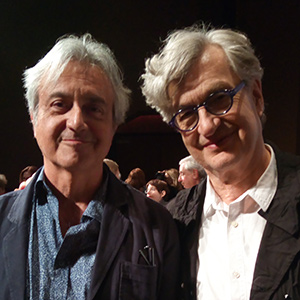 In late Spring, Professor Villani met with German master filmmaker, Wim Wenders, at the International Documentary Association’s Conversation Series. The event featured clips from his films and lively conversation between Wenders and Turner Classic Movies host Ben Mankiewicz, mainly about Wenders’ latest film, Pope Francis – A Man of His Word, released in US cinemas in May.

Villani has met Wenders several times over the years. In 2006, he introduced him at the Architetture Interiori (Inner Architectures) event at Rome's Vittorio Emanuele II National Library. Villani gave a speech entitled Wim Wenders' Heroes, presented a montage of clips from his movies, and translated for Wenders as he talked books and characters with film critic, Irene Bignardi.

“I feel any filmmaking student has a lot to learn from Wim Wenders, his profound knowledge and love of film, his enthusiasm and multifaceted talent,” said Villani. “He has always pushed the boundaries of innovation consistently bringing the film medium to new heights. His use of technology as a tool to tell his stories, not an end in itself, is remarkable. While he reinvented 3D to create an all-enveloping deep space for the choreography of Pina Bausch (Pina, 2011), and the audience's experience of it, his 1995 film, A Trick of Light was shot mostly with a hand-cranked camera from the 1920s. For me he has been and is a continuing source of inspiration.”

The Hollywood event, held at the Lynwood Dunn, Mary Pickford Center for Motion Picture Study, covered the range of Wenders’ career, including Buena Vista Social Club, The Salt of the Earth, Pina, and Paris, Texas. Wenders has worked mostly independently on projects with very low to multimillion dollar budgets.

“Wenders talked about his love of documentary film and the people he has met, worked with, and learned from along the way,” said Villani.  “He talked about the genesis of the Pope Francis film, as well as his other works showing how a filmmaker should be keen to the world around him/her as a constant source of inspiration.”

Villani added, “Making movies is often compared to dreaming but Wenders, who left medical school to become a filmmaker, tells us that dreaming without believing doesn't get far.”

Villani is an independent and freelance writer/producer/director in both Los Angeles and Rome. His films have been selected and honored by numerous festivals in the U.S. and Canada.  His most recent completed efforts are An Interview with Peter Brook and Shindler’s War.

His award-winning films include A Ticket to Hollywood: Europeans in Los Angeles, 1925-56 – Prologue, and Roman Kosher, about Roman Jewish cuisine, which earned an official selection from the LA Jewish Film Festival while still in progress.

Other works include a non-fiction feature, The River and The Ocean, currently under development and A Ticket to Hollywood: Europeans in Los Angeles, 1925-56, Part II, in post-production. Older films include biographies on Marilyn Monroe, Frank Capra, and Rita Hayworth for A&E Network.

Villani also has written and directed a multilingual play, Welcome to Hollywood in Rome and acted in several motion pictures including Martin Scorsese's Gangs of New York.

He is the Rome coordinator of The Sephardi Voices oral history project (http://sephardivoices.com) which offers AUR students the opportunity for internships in film, photography, and journalism.  He has published and presented papers in both the U.S. and Europe and has had several one-man and group photo exhibitions in Los Angeles, where he returns regularly.

He has taught film and photography at the American University of Rome since 1998.

Media requests:
Professor Villani is an international film and media expert and has been quoted in The Los Angeles Times, ABC News, The International Herald Tribune, The Guardian, the BBC, and The Times of London. He is fluent in English, Italian, French and Spanish.