Rome is thriving in the 'new normal'

Phase 3 has seen people in Rome taking tentative steps towards the new normal. Thanks to the hard work put in by the country as a whole to adhere to the lockdown in previous months, the current stable situation and the freedom it brings is being savored all over Italy.

When Rome turned 2773 years old on April 21st this year, it was not with the usual magnificent parades throughout the city that the occasion was marked, but a low-key commemoration broadcast online and on television. That this vibrant and joyful event, always a highlight of Rome’s calendar, could not be celebrated to its fullest was a shame, to be sure. However, in a way, Rome’s birthday came at a time when we needed it the most, as the arrival at this impressive milestone sent a very clear and reassuring message: Rome is truly indomitable. It was over two thousand years ago that Rome was first described as “The Eternal City”, and it has lived up to this moniker time and again across the millennia. 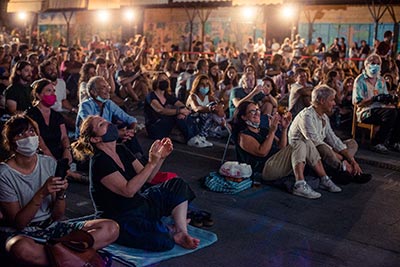 Of course, Rome was spared the intense crisis that hit the northern regions of Italy, and this made it easier for us to weather the storm. With the threat less perceptible in Rome and in regions to the south, this could have sparked complacency in disregarding the lockdown. However, Italy showed its true colours in a time of crisis by unifying and working together in order to aid the fight against the virus as soon as possible; “io resto a casa” (“I stay at home”) was embraced across the country. Thanks to the collective isolation effort guided by level-headed leadership, the situation calmed – to the extent that there are hopes that the force of a second wave might be mitigated on account of all that has been learned from the first wave.

Along with Phase 2 came many rules and measures aimed at ensuring the continuation of the downward trend of the number of infections. While the loosened restrictions were welcomed, the rules that came with them seemed to contradict so much of what makes Italy the captivating place that it is. Asking Italians to renounce their conviviality seemed rather like asking the sky not to be blue. And yet, it happened. It is a burden that Italy is bearing with good grace in order to get back on its feet as soon as possible: "It's not nice to go to restaurants and see people with glass shields between tables, but it was a good way to start again, and people have accepted it" (Menicanti).

So far, the sacrifices made are being paid back in spades. Where during the peak of the virus in Lombardy there were 12,000 patients hospitalized and 1,800 in intensive care due to Covid-19, there are now just 277 hospitalized and 41 in intensive care in the entire region. Menicanti notes that the memory of those grave times “has produced compliance that made control of the virus possible”.

It is now just over a month since the freedom to travel freely around Italy has returned, and the joy with which we did so was palpable. Wandering around the historic center of Rome, you would see people taking in their city as if seeing it for the first time. As the residents of Rome reclaimed their city (no doubt to the great disgruntlement of the seagulls and pigeons who had the run of the place for a few months), we realized just how much we had missed it. For many of the younger generations, it was likely the first time they had seen Rome without the rush of tourism and traffic. It was a special moment indeed.

With the arrival of summer coinciding with the relative stability of Italy’s Covid situation, people are enjoying this current period of calm while remaining cautious about the coming fall and winter months. However, Menicanti points out that health officials have gotten better at identifying sources of infection and reacting quickly to contain them. For instance, as soon as a hot spot at a company in Bologna was identified, it was shut down: "Now we know what to do" to prevent local outbreaks from growing into a large second wave. "Of course it's not over, we know that. But the population is very prudent and being very attentive to the rules."

The quotes and figures referenced were taken from this article in MedPage Today.