Italian diplomat and author, Dr. Andrea Canepari, was presented with an honorary doctorate by AUR's President, Scott Sprenger, at the university's annual commencement ceremony on May 26th, 2022.

In making the presentation, President Sprenger stated the following

The American University of Rome takes great pride in its liberal arts programming, and particularly in the fields of International Relations, Art & Architectural History, Italian-American Culture, and other disciplines in which you, Mr Canepari, have a deep interest and have gained an international reputation.

We at AUR look at your career, your wide-ranging contributions to Italian-American cooperation, and your tireless promotion of Italian culture around the world, as exemplary. In both, your diplomatic roles and in your influential publications, you have demonstrated how enriching, long-running and even surprising is the relationship between the United States and Italy – a viewpoint that is at the heart of what the American University of Rome stands for.

In the area of International Relations and Diplomacy, you have already built at a young age an illustrious career as a high Italian government official and diplomat, serving currently as a Directorate General in the Italian Ministry for Foreign Affairs in Rome, but also previously as Ambassador of Italy in the Dominican Republic, Consul General of Italy in Philadelphia, First Secretary of Political Affairs and Relations at the Italian Embassy in Washington, D.C., and Chief of the Economic and Commercial Office at the Italian Embassy in Ankara, Turkey.

As Ambassador of Italy in the Dominican Republic, you accumulated many accomplishments, beginning with the reopening the Embassy of Italy after a hiatus, the inauguration of a new Diplomatic Chancery, and the promotion of hundreds of cultural events to celebrate the common history between two countries and the many mutually-beneficial collaborations and opportunities.

While serving as Consul General of Italy in Philadelphia, you were similarly active in the promotion of Italo-American relations, received numerous awards (including the “Global Philadelphia Biennial Award” from Temple University, for your enhancement of international relations for the city of Philadelphia, and served on important commissions, including one that facilitated the creation of the first medical degree recognized in both Italy and the United States.

In addition to your remarkable diplomatic experience, your wide-ranging intellectual interest in the impact of Italian people, art, and culture on the United States is also an important dimension of your career and comes through in your prestigious publications, such as The Italian Legacy in Washington D.C.: Architecture, Design, Art, and Culture andThe Italian Legacy in Philadelphia: History, Culture, People, and Ideas, published in 2021, that stresses the ongoing and remarkable impact that Italian immigrants have had on the art, culture, politics, and industry of both Washington DC and Philadelphia.

One of the extraordinary things about your career, Mr. Canepari, is not only your wide-ranging roles and interests, but the way in which these are unpinned by your singular commitment to finding and drawing out the positive connections between different cultures. In our currently polarized and conflictual world your enduring dedication to bringing different peoples and cultures together in common and humane purposes is precisely what the world needs. Indeed, your career for me is the living embodiment the famous Italian proverb: I fratelli uniti tra loro formano un fascio che pùo resistere agli sforzi più robusti (Liberal translation: Siblings joined together in unity of purpose can surmount all obstacles OR, translated directly into an American proverb, we might say: United we stand, divided we fall).

Let me conclude by saying that this honorary doctorate from The American University of Rome is bestowed with our deepest respect, and in recognition of your contributions to the humanities and arts, and to the inspiration you provide our students as they now embark upon their own lives & careers.

I am deeply honored to use the authority invested in me by the District of Columbia, and the State of Delaware, to confer upon you, Andrea Canepari, the degree of Doctor of Humane Letters Honoris Causa. 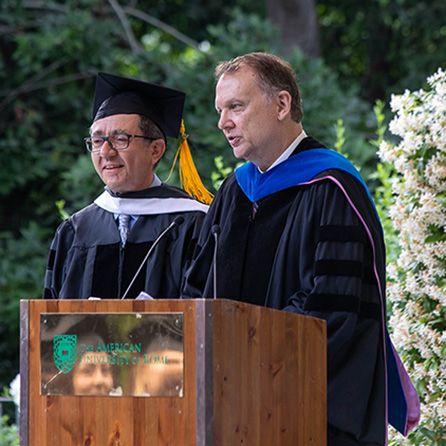 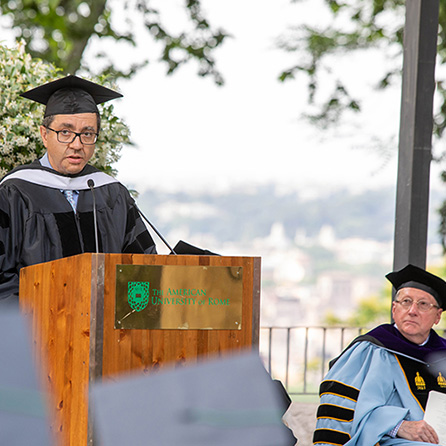 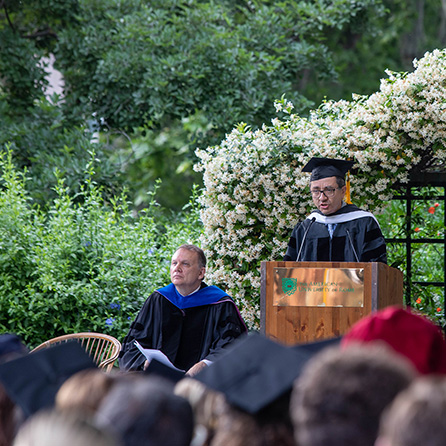