An Edible Escape: Sustainable Culinary Creations at the American Academy of Rome

The American Academy of Rome (AAR), tucked away in the Monteverde neighborhood, provides a space for contemplation and research amidst a collaborative scholarly atmosphere for thirty lucky Rome Prize Fellows each year, along with a talented culinary staff. The verdant campus, marked by luscious garden spaces meant to inspire reflection and creativity, provides a backdrop for artists and scholars seeking to hone their craft. This academic and culinary center of excellence opened its gates to AUR Food Studies students for a tour of the campus, with a focus on its Rome Sustainable Food Project (RSFP).

Head Chef, Kyle Pierce welcomed students to the idyllic campus that is the American Academy of Rome for a tour through the main building and picturesque garden spaces, before offering a culinary demonstration on the art of pasta making. He and Sous Chef, Sara Levi—very much culinary philosophers in their craft—conversed animatedly with the group about their inspiration for the Academy’s menus, expressed through the melding of traditional flavors with modern influences.

The lingering presence of Alice Waters was felt strongly. The famed chef and sustainability advocate visited the institution in 2006 and guided the remodeling of the AAR cooking approach through the inauguration of the Rome Sustainable Food Project, which rejects industrial practices and encourages a greater connection between the land and the kitchen. The RSFP provides the community of the Academy with a collaborative dining program that nourishes scholarship, conviviality, and an overall sense of belonging. 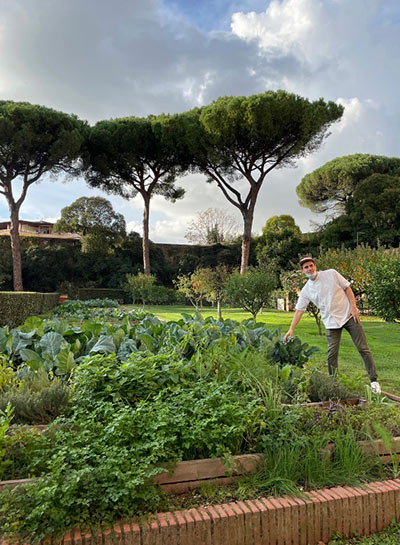 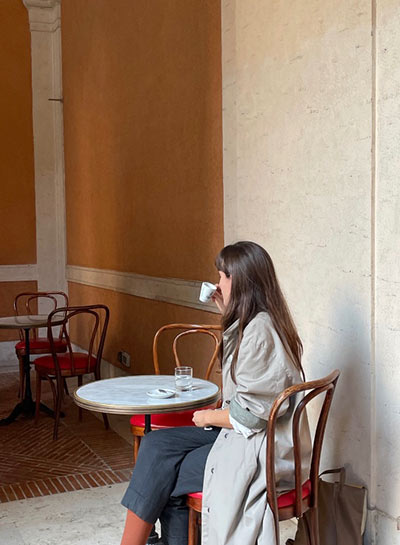 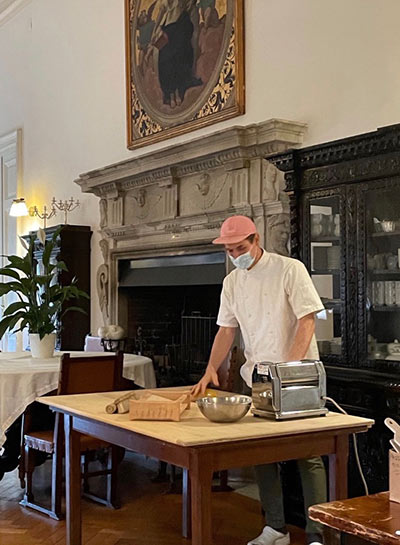 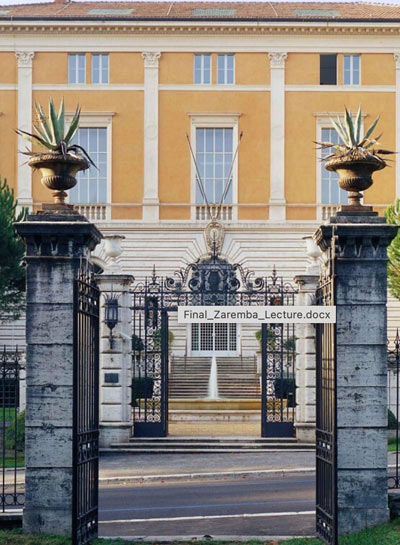 Kyle and Sara stressed how for them inspiration is drawn from cucina povera, informed by seasonality and locality, with a primary emphasis on vegetables as the star elements of the plates. They work by a salad-central philosophy and ensure that greens are included in some form during each meal. Yet, when questioned if traditional Italian food guides their practice, the chefs conceded that, while it provides the starting point, experimentation, creativity, and wider Mediterranean influences ultimately direct the conception of the final product.

The gardens serve an essential role in the gastronomy of the Academy; and the team was deliberate in their discussions on the importance of soil health as an indicator of the flavor and quality of the food they will later produce. They are intentional in their sustainability initiatives—even if nascent—having recently transitioned to a more regenerative gardening approach by adopting a no till policy and companion planting system to supplement their compositing efforts. The Academy has also begun seed saving, with the hope to start more of their produce from such practice. Correspondingly, the aesthetic significance of the space did not go unnoticed, measured by perfectly aligned, raised garden plots set against a bucolic background of walnut, apricot, and olive trees—meant to mimic the countryside.

While the gardens produce only a fraction of the food needed to feed the Academy community, the importance of partnerships with local farmers was highlighted as well as the AAR general inclination toward supporting small businesses to supplement their food needs; in particular, biodynamic farms or those practicing similar natural methods.

As with many other sustainable farms that the class has recently visited, circularity inevitably emerged in the vision and practice of the RSFP: respect for the soil and land leads to healthier, more robust produce, ultimately resulting in a more flavorful food plate. By following the seasons, an ideal balance occurs effortlessly, which is reflected at both the plot and pot levels. As beautifully put by Kyle Pierce at the beginning of the tour: “an edible landscape is a beautiful landscape.”