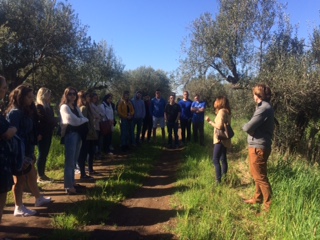 On one of the first sunny mornings of early spring, a busload of AUR’s travel and tourism and marketing students embarked on a day-trip to Ariccia, accompanied by Professor Anna Sasso. Located about an hour drive away from central Rome, the Castelli Romani are a group of communes that have provided Romans with an escape from the chaotic city since the ancient Roman times. Guarded by the Alban hills, the Castelli Romani towns offer cool weather in the summer, as well as some of Lazio’s most famed products. The volcanic, fertile soil found in the area, as well as the surrounding lakes and microclimates provide an environment in which olives and grapes can thrive, and our hosts from Fontana di papa have definitely taken advantage of the fruits of the land.

Our first stop of the day was a visit to the vineyards that provide Fontana di papa with grapes for wine and olives for oil. Our guides, Nina and her husband Alessandro, took us for a walk through the vineyards, which stretched on over several acres of land. The branches were bare, as we had gone on early season before the new fruit of the year began to emerge. Down a grassy hill, between the vines and fields, there was a white table that awaited us for an olive oil tasting. Nina explained the process which the olives go through, in order to be pressed to extract oil. The first press is what gives the coveted and flavor extra virgin olive oil and through a second pressing, virgin olive oil can be obtained which is a much more subtle tasting oil. The oil was poured over Pane di Genzano, a local bread which is protected under Italian standards and classified as an IGP (indicazione geographica protetta). The bread itself is hearty, with a thick outer crust and sturdy internal dough, full of air pockets. It was a delicious and much welcomed snack after our journey and the first of our tasting of Ariccia.

Following the vineyard stop, we took another very short ride to Fontana di papa’s processing plant. Nina and Alessandro guided us through each step of the winemaking process, from where the grapes are dropped off, to the giant, outdoor storage barrels that could hold thousands of liters of wine. We were also able to visit the bottling room which consisted of an intricate system of conveyor belts and machines that flowed constantly to fill the orders. Only one type of wine is bottled at a time, but Fontana di Papa produces many different types of both red and white wine, which are then carefully marketed to different markets around the world.

After our tour of the facilities, Nina gave us a quick presentation about the marketing efforts of the business, explaining how the company have evolved over time, as well as the varieties of wine they produce. Their wines range from table wines to DOC (denominazione origine controllata) which are classified and regulated by the government standards to ensure that each bottle of wine is made up to standard. We were able to sample a tasting of two white and two red wines produced by Fontana di Papa, one of each type were classified as a DOC and the other two were simple table wines. The wines were paired with various salumi, bread, pizza Bianca, olives as well as the most adored dish in Ariccia-porchetta.