Everyone was a little groggy at 6.45 am on leaving AUR and Rome in the rain. 75 minutes later the sun was out and the team was in rural Umbria. To be precise, this was the first day of a 1-credit weekend archaeological class to make sense of two archaeological sites at Giove. This hilltop village lies above the river Tiber between Orte and Orvieto. By lunchtime, it was 17 degrees and the students were dining on prosciutto and pecorino, lying on the lush early spring grass.

The first site is known as San Valentino, particularly appropriate given that the date of our Friday fieldwork was February 14! The most visible monument here is a long wall with distinctive herring-bone coursing punctured by a series of doors or windows, their sides defined by tiles. Set back from the Tiber, this wall apparently once terminated in a church known as San Valentino. The wall retains an olive grove, then a lightly ploughed field. Imperial Roman potsherds and tiles still litter the ground, easily visible to the naked eye. 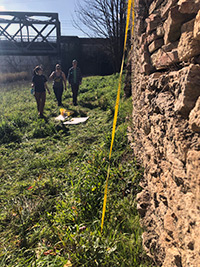 The project used ground-penetrating radar to see if there were ‘anomalies’ – underground features under the olive grove, and sure enough, just where the owner said she had found mosaic tesserae, there were indications logged by the radar’s computer. Meanwhile, a second team prospected the fields for metal. Their only result was shrapnel, probably part of a Second World War bomb found here. The third team recorded the long wall and tried to make sense of it.

The wall seems to have been much longer in antiquity extending at least 50 m to the east and probably as much as 100 m to the west. Its size together with the findings in the fields points to a substantial riverside settlement. Locals told us that tile kilns had been found in the past, producing materials for Rome’s rapid expansion in the late Republic and early Imperial periods. Near the 19th-century railway bridge, we found a confined area of massive blocks, perhaps part of a short-lived riverside wharf.

Day 2 of the class was spent under cloudless skies at Malvicino, an abandoned farm on the first terrace overlooking the Tiber with views to the extinct volcano at Cimino. In amongst the farm itself and its pigsty, we picked apart an intriguing history. In the back of the pigsty, two large masonry blocks seem to be part of a large monument on a well-made terrace. In the farmhouse are remains of an ancient cistern with the rim of a late Republican Dressel 1 amphora embedded in the wall. A further clue to this enigmatic monument were squares of Roman floor tiles, broken up and dotted around the most recent (later 19th-century) buildings. Our working hypothesis is that this was a small temple constructed by a well on a route passing from northern Lazio towards Amelia. What makes this monumental story even more fascinating is that the pigsty monument was then re-envisioned as a small Medieval tower with more monumental blocks in its east wall and layers of Roman tiles in its north wall.

The full story of this later Republican place and its Medieval successor will take time to elicit from all the radar results, photogrammetric record, and drawings that we made. But like San Valentino, it shows how much there is still to be discovered in the Italian countryside.

On 21 March we shall tell the villagers of Giove what the class found in two intense days under the Umbrian sun.