Dr. Richard Hodges has held the office of President of The American University of Rome since 2012.

Dr. Hodges began his career as an archaeologist with excavations in his home village of Box, Wiltshire while at high school. During that time he founded a village archaeology society which is thriving today. He studied archaeology and history at Southampton University where he completed a doctorate on the archaeology of Dark Age trade. In 1976 he joined Sheffield University as a lecturer and while there launched excavations in England and Italy at Roystone Grange (Derbyshire), Montarrenti (Tuscany) and San Vincenzo al Volturno (Molise).

From 1988-95 Dr. Hodges was Director of the British School at Rome, during which time he enlarged the excavations at San Vincenzo al Volturno with support from the Abbey of Monte Cassino, and joined the Butrint Foundation as its scientific director (1993-2012) to launch new excavations and site management strategies at the World Heritage Site of Butrint (Albania).

From 1996-98 Dr. Hodges was Director of the Prince of Wales’s Institute of Architecture, then from 1998 he has been Professor in the School of World Art Studies at the University of East Anglia, Norwich. During this period, he served in the Ministry of Culture in Albania (1999), as adviser to the Packard Humanities Institute during the Zeugma (Turkey) excavations (2000), and as Williams Director of the University of Pennsylvania Museum of Archaeology and Anthropology (2007-12).

Dr. Hodges was awarded the Order of the British Empire (OBE) in the Queen’s honours in 1995. 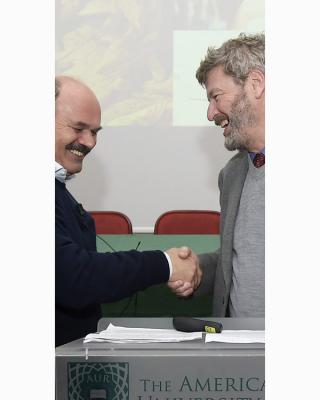 AUR's President
Board of Trustees
Staff Directory
Careers at AUR