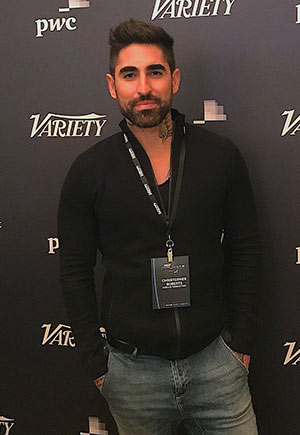 Christopher Roberts (Communication, 2008) is currently running an agency in Los Angeles, California called Circus Marketing. He is part of a collarobative team, “an independent micro-network built upon contemporary values and principles [which] combines art and science to craft creative principles that produce award winning global brand strategies, services or products that help organizations grow.” With offices in L.A., Mexico City, Madrid, and Buenos Aires, Circus maintains a “global presence with a multi-cultural influence.”

Christopher celebrated recent success for the launch of the Warner Bros. game he helped develop based on the film San Andreas, featuring Dwayne “The Rock” Johnson. As Project Leader, Christopher led the tech and development teams in the process of the game’s development ensuring the project ran smoothly. The game, Earthquake Heroes, was designed to help promote the film San Andreas and allows users to help The Rock save earthquake survivors. He also took part in building a campaign called Social Trailers for Netflix which recently won the Lion in Cannes and took Bronze at the 30th edition of the “Festival Iberoamericano de la Comunicacion Publicitaria” 2015 El Sol.

In an effort to generate buzz for its main titles, Netflix Social Trailers gives viewers the opportunity to review titles based on the idea that a friend’s opinion is far more trustworthy than an actual trailer which shows only the best parts of a movie or series. Netflix invites followers to comment on a post of a specific title then creates trailers based on these opinions. As Circus Marketing’s case study states, “Netflix and it’s fans co-created original content that helped great stories be told.”

On his experience at AUR and how it has contributed to his success, Christopher shares, “AUR is the base for everything I have done professionally since 2008. I was fortunate to have had passionate and dedicated professors that instilled in me the tools and knowledge that I still apply until this day. From a human and academic perspective, AUR was my foundation for what was to come. Work and life experience is the most valuable process to becoming an expert at any field, but AUR prepared in the communication realm for what was to be my future in the world of advertising.”