Food Politics in the U.S.

Sheingate, A. (2022). The Politics of Food. Johns Hopkins University. Presented for the FS 505 Food Policy Course.

Political scientist and professor at Johns Hopkins University, Adam Sheingate virtually joined the FS 505 course on Food Policy to discuss the role of corporate concentration along the food supply chain. A central part of his lecture focused on the massive U.S. Farm Bill, which encompasses policies related not only to agriculture, but also to nutrition. Professor Sheingate illustrated how corporate interest and political polarization come together through the passing of this legislation every five years. 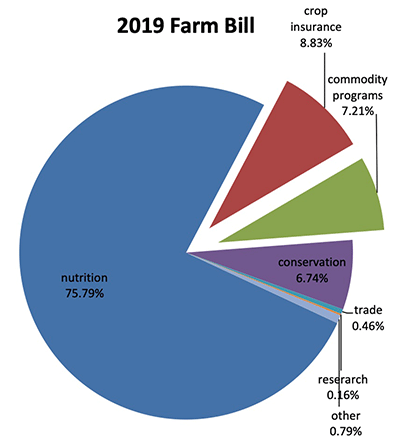 The Farm Bill works to authorize financial subsidies and other agricultural or nutritional based programs. Within the context of the Covid-19 pandemic, funding for these programs has significantly increased to meet the rising needs of the population. Yet, somewhat surprising given its name, the majority of resources allocated through this policy is directed toward supplemental nutrition programs, like SNAP: meaning that benefits to farmers are limited in comparison. Furthermore, the farmers who do profit financially from the bill tend to be those with more capital to start, thus leaving smallholders on the wayside.

Professor Sheingate spoke about the Farm Bill within the context of what he termed the “asymmetric polarization” of United States’ politics today. Since the bill’s passing depends on a coalition of both conservative Republicans and liberal Democrats, its fate often remains in flux due to their increasing inability to compromise. Generally, Republicans—often the majority in this coalition—tend to represent the interests of rural citizens (primarily from the Midwest), whose livelihoods revolve around agricultural production. Democrats, in contrast, represent more urban dwellers whose focus rests on social justice policies, like food access and security.

From these diverging priorities, the role of corporate power comes into play. Even though the Farm Bill coalition is comprised of majority Republican senators and congresspeople, corporate lobbyists continue to call for funding on nutrition programs, as they ultimately profit from greater spending on food purchases. Thus, Professor Sheingate suggests that corporate concentration within the food supply chain in fact plays a central role in the passing of the Farm Bill each cycle, as these activists balance the demands from either side of the aisle.

His lecture makes clear the highly vulnerable nature of the food supply chain, not only to political preferences and industry lobbies, but also in the context of a global pandemic and with the outbreak of war. Citing past examples of supply chain disruptions, such as during the 2008 and 2011 food crises, he recognizes that the spread of Covid-19 has similarly interfered with efficient production. The Russian invasion of Ukraine may pose additional challenges—although it is too early for the data to indicate in exactly what way.

Thus, while high levels of corporate concentration in the food supply chain create the illusion of efficiency, the hyper-focus on high yields and the reliance on only a handful of firms to produce the majority of the world’s food may actually create a much less resilient system. Current global dilemmas continue to prove that the international food system must be strengthened. However, the complications of dissolving corporate concentration may in fact have further political implications—such as relates to the passing of essential legislation like the Farm Bill.