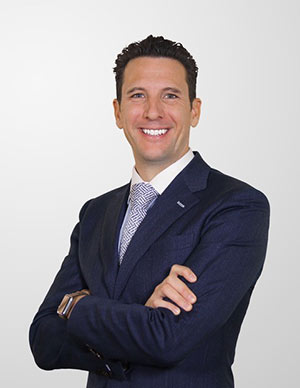 When Mitch Henderson was searching for a college, he wanted a fully accredited program based in Rome that offered brand name recognition throughout the world. He also wanted a school with a strong business program. “Additionally, and this sometimes surprises people, I did not want to attend a university that attracted students looking for a ‘spring break abroad’ type of experience,” he recalls. “I was seeking to live with and amongst Italians and experience the language and the culture without feeling peer pressure to party every night.”

The American University of Rome fit the bill. “Being in such a unique city, together with so many incredible minds was an experience I will never forget,” he explains.
“As beautiful as the architecture, art, and culinary scene is in Italy though, I learned the most living among Italians and speaking Italian.”

Mitch made many friends during his time at AUR. “The great thing about the friendships I made at AUR was their breathtaking international scope,” he recalls. “I am in touch with many former classmates, and they are literally from all over the world.”

Close relationships were also forged with AUR professors who made an everlasting impact on the young student, including Professor Kathleen Fitzsimmons, from whom Mitch took a business course during the late 1990s that turned out to be monumental. Mitch recalls Professor Fitzsimmons excitedly telling her class about a new company she predicted would fundamentally transform the world. “Professor Fitzsimmons told us about the way this company captured feedback and the ease it brought to online purchases,” he adds. “At the time, this vision made many laugh. That company’s name? Amazon.”

“This class changed everything for me, and I can honestly say that this one discussion did more for me than any of the several courses I’ve since taken,” says Mitch who credits Professor Fitzsimmons with teaching him about business. “She was literally ahead of Stanford in her vision.”

Mitch relished the classes he took with Professor Maurizio Marmorstein from whom he learned about Luigi Pirandello, the Italian dramatist, novelist and poet who won the Nobel Prize in Literature in 1934. “We learned (gasp!) that some incredible writers do not write in English,” he exclaims. Another professor who made an impact on him was Breda Ennis who gave Mitch the confidence to write creatively in Italian, “something I had barely achieved in English,” Henderson recalls. “She taught me to extract meaning from greats like Giovanni Boccaccio, Umberto Eco and Dario Fo, who won the 1997 Nobel Prize in Literature,” he adds.

Living abroad provided a broader perspective of the world which has continued to benefit Mitch on a professional level. “I recently read that people who have lived abroad have a more powerful sense of what new products will succeed and which will fail,” he explains. “I find this to be acutely accurate. You gain an understanding of human nature when you live abroad amongst an entirely different culture and language.”

Attending AUR also prepared Mitch to be an effective leader. “Sometimes, when I am among a group of all American executives, I realize many of them have not seen real human nature - they are missing an element of insight,” he explains. “They also take assets for granted; it’s as if they don’t even see them, and don’t realize they can be leveraged and monetized.”

The experience studying, living and working in Italy has led Mitch to develop a like-minded culture at his company, Clear Seas Research and BNP Media, where he is Co-Chief Executive Officer. “The culture in Italy is what I would call a free ‘resource’ or ‘asset,’” he explains. “If you are a business leader and want to improve the culture within your organization, just look at Italy. Add a barista and a coffee bar to your lunch room. Make it a rule to say ‘Buongiorno!’ to everyone you see. Sit down at a nice restaurant with your best employees and customers (and NOT at a burger joint!) and enjoy the conversation. Set up a room where staff can watch the World Cup (or March Madness, or whatever sport you choose) and socialize. Finally, encourage your employees who are parents to spend more time with their children. If you can’t afford to do this then use my personal favorite Italian value: IMPROVISE.”

Mitch often advises students who are applying to college to consider where they want to be in ten years. “I suggest they write down that vision,” he explains. “And I can say in about eighty percent of the conversations I’ve had with students deciding whether or not to go to AUR, the answer comes back to yes.”

"The experience a person gains while studying in Italy is also beneficial to anyone seeking a business or legal career," adds Mitch. “If you want a business career, you will want to have international experience,” he explains. “Are you going into law? The experience I received in Italy learning about civil law compared to common law taught me so much about both the Italian system as well as the US system.”

“Think about how better this world would be if the US (or your home country) could learn the great things about Italy,” adds Mitch. “If you want to see this in your lifetime then you owe it to yourself, and to the greater global community, to get this experience.”