Commemorating the 10th anniversary of the passing of Professor Terry Rossi Kirk, professors Paul Gwynne and Timothy Allen spoke to an enthusiastic audience on topics that would have been near and dear to the interests of the late professor.

Looking at the trees gazing at the sky. An exhibition by Marina Buening

The three artists discuss the relationship between man and nature, highlighting aspects such as fragility, conservation, transcendence, reality and illusion in a succession of intimate dimensions that

Internship at the Capitol

Having an internship with Congresswoman Velazquez this summer was a unique and rewarding experience.

There is now ample evidence that food provisioning is a major determinant of the unprecedented and possibly irreversible changes in ecosystems. 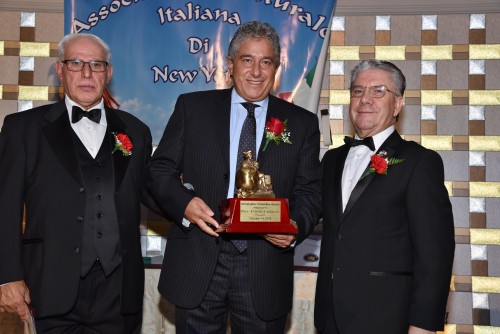 Sbarro Health Research Organization founder and Director, Antonio Giordano, M.D., Ph.D., has been recognized with a career award "for the great contributions he has made and which he will co

On the unveiling of a memorial to Peter Tompkins - journalist, author, spy.

On the evening of September 25, 2019, a memorial to Peter Tompkins, an American-born, European-educated spy, was unveiled on the main campus of The American University of Rome.

Located just outside of Rome, the CAR acts as the largest distribution point for food in Italy and the fourth in Europe. The center is a hub for retailers to come and purchase fresh produce and fish that has been checked for quality, labeled and packaged accordingly.

On Wednesday 9 October 2019 at 18.00  Professor Paul Gwynne will give a lecture entitled 'The Villa Farnese at Caprarola and its gardens' on behalf of the British Institute of Florence.

The M.A. Cultural Heritage Students took their first fieldtrip of the semester to the historic Umbrian hilltop town of Amelia on Monday September 16, 2019.