A Rome Food Policy: Reconnecting the City to Nature through Grassroots Initiatives

Mazzocchi, G. (28 February 2022). Urban Food Policies: From the Italian scenario to the process towards a food policy for Rome. Presentation for the FS 504 course on Food Policy.

Giampiero Mazzocchi from the Council for Research on Agriculture and Agrarian Economics (CREA) joined the FS 504 Food Policy course to discuss the landmark passing of Rome’s first Food Policy last April. in which he participated as part of several civil society organizations and researchers.

Coinciding with the master cohort’s study on multi-level governance in food and agriculture, Mazzocchi’s lecture expertly contextualized Rome’s local food system within wider national and global policies. In his view, urban food policies are the remedy to reconnect nature and city, or as in the Epic of Gilgamesh, civilization and wilderness. Relying on the tale of this ancient, Mesopotamian king who embarked on a journey to rediscover the land outside his walled city, Mazzocchi creatively referenced the long-enduring divide between urban and rural.

In  a modern-day context, he noted the increasing trend of urbanization as the backdrop for emerging food policies, highlighting 2015 as a particularly stand-out year: the first that the global urban population exceeded the rural. Given this shift in demographics, politicians have begun to conceptualize ways of feeding a growing urban population. Yet, the complexity of developing a food policy for the city lies in the need to connect multiple sectors. A comprehensive policy must consider the role of agriculture, economics, politics, and involved stakeholders. Only then will it succeed in incorporating the local into the urban, while best supporting health, sustainability, and the land. 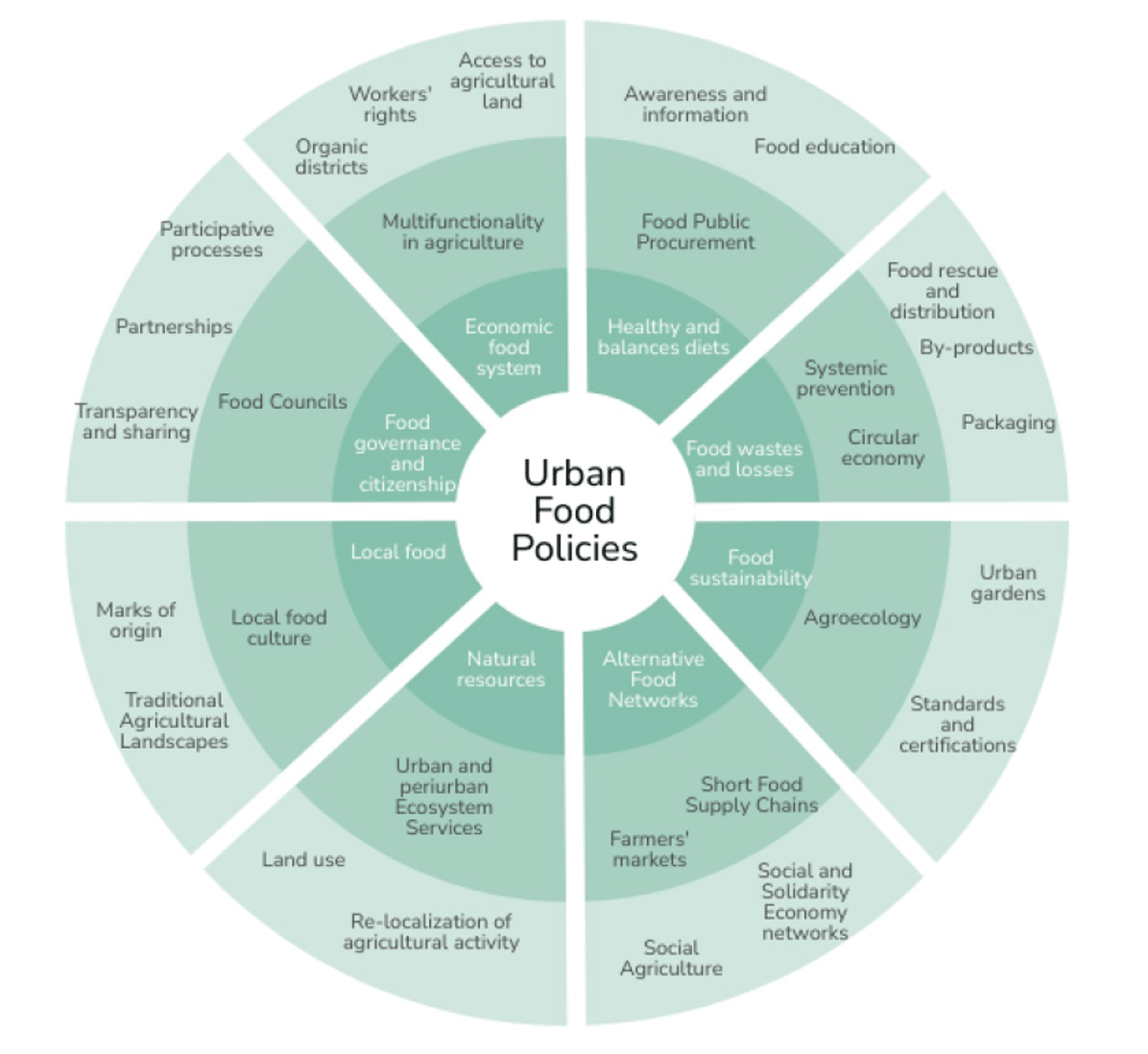 Mazzocchi reflected on Moragues-Faus’ 2013 conception of urban food policies as “a process consisting of how a city envisions change in its food system, and how it strives toward this change,” to explain his own efforts as a member of Rome’s Food Policy Council. From this assembly, and with a vision of change in mind, the process to transform Rome’s food system began in 2018.

The Council was intended to be participatory and composed of a range of members from diverse professional backgrounds. Inspired by the Milan Expo of 2015, they formed as a grassroots initiative with the aim of revitalizing Rome’s urban food systems. A particular focus on how to deal with the issue of the “local” emerged in conversation. For many, Mazzocchi included, the local remains an undefined concept that could encompass geographic distance between producer and consumer, but one that also carries political and economic weight. Ultimately, acknowledging the intricacy and interwoven nature of rural areas within urban systems allows for more successful policy advancements.

Pride in the third sector—civil society—rang through in Mazzocchi’s account of their more than three-year process. Ultimately, the impact of their persistent work was celebrated and codified in the passing of the 2021 Rome Food Policy, whose current working groups directly reflect the priorities suggested by the Council itself. Mazzochi’s efforts speak to civil society’s power in bridging the gap between individuals and administrations. More than anything, it serves as a call to action for all those with a passion to inform and improve local governance around salient issues, like the source of our food.