Who is consuming the countryside? Food, tourism, and the need for a multifunctional approach to rural development in Portugal

Sociologist and Doctor of Environmental Sciences, Elisabete Figueiredo from the University of Aveiro, joined the FS 511 course on Food, Locality, and Rural Development to discuss the role of tourism for rural development in Portugal. She titled her discussion as a question—Rural Territories in Portugal: Food and tourism as ways of interconnecting rural and urban territories?—suggesting the uncertainty of this claim in practice. Portugal is facing a rural exodus, an increasing trend throughout many other regions across Europe, that has posed significant economic challenges for countryside dwellers.

In her presentation, Elisabete featured data on the closure of thousands of schools and post offices in rural areas. The trend, O Portugal Que Fecha (A Portugal that Closes) contextualizes the dire state of rurality in Portugal today: abandonment and disinvestment by both State and people. In response, some have conceived of rural tourism as a “magic” solution to combat an impoverished and dying countryside in the face of urbanization. They hold hope in the opportunities that tourism will bring to regenerate economic activity and bring life back to peripheral spaces. 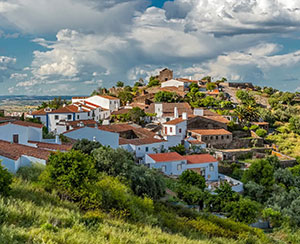 Tourism in Rural Areas (TER) as a concept must abide by certain conditions, following Bernard Lane’s 1994 specifications: small in scale, traditional in nature, organically developed, and controlled by local populations. The Portuguese landscape offers four types of experiences that fall within these classifications, ranging from family and country houses to agritourism and rural hotels.

The growth of rural tourism business since the 1990s has led to a substantial increase in tourist presence, yet these holidays tend to center around the sea or urban metropolises. In fact, TER has fallen short of general expectations for its role as a promotional and financially prosperous pursuit. For many, the not-so-distant memory of the agricultural plights and struggles of countryside living make the “rural idyll” an unpopular concept. Further, TER has failed to capitalize on rural networks or local employment to generate sufficient economic activity for the benefit of the population in these spaces. Ensuring the longevity of Portuguese rurality means recognizing the plurality of the countryside and innovating ways to connect the land to its inherent resources. This process demands greater investment from the government, as much as from the population itself. Alas, the countryside remains on the periphery.

Today, Elisabete continues to research ways that individuals engage with rural spaces—even if in urban settings. The Selling the Rural IN (urban) Gourmet Stores, or STRINGS, project looks at who “consumes the countryside” via gastronomic purchasing at such stores in Lisbon, Porto, and Aveiro. Although at an early stage, her research offers potential for expanding countryside resources into the city. Thus, the question remains: is tourism alone sufficient to revitalize the countryside? Elisabete’s work recognizes its potential but calls for greater and more extensive studies to determine a solution founded on multifunctionality.